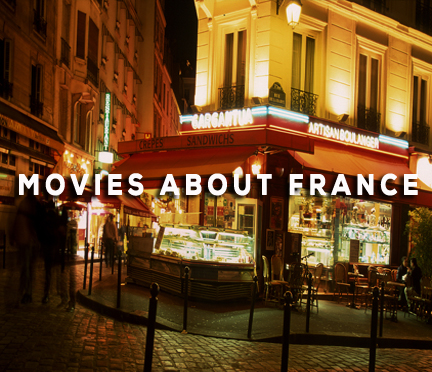 Planning to visit and cycle in France? Really there are such ripe pickings in order to savour, read and view on this country and its people and of course cycling, that we´ve had to restrain ourselves with this list. 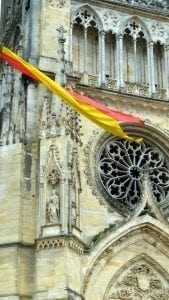 The classic history movie, The Lion in Winter (1968)  is a good one to start with if cycling in the Loire Valley.  Oscars galore, great actors, Peter O´Toole, Catherine Hepburn and Anthony Hopkins and fascinating history, what more could you want? Based roughly on the Christmas Court celebrated at Chinon in 1183 when Henry II, King of England, his sons, (inc Richard the Lionhearted) and wife, Eleanor of Aquitaine all spent time plotting against each other about the future succession of the crown.

Les Petits Ruisseaux is a French romantic film drama (2010), directed by Pascal Rabaté which has the moto, “You’re never too old to have a good time”. Emile enjoys a peaceful retirement fishing on the banks of the River Loire with his friend Edmond. Edmond dies suddenly, after telling Emile he has been leading a secret and very active love life. Realising life is short, Emile embarks on his second adolescence…

La Reine Margot (1994) – Another quite intense film with a lot of fighting and some sumptuous costume and soundtrack, this film describes the 1572 St. Bartholomew Day´s Massacre with Young Queen Margot trapped in an arranged marriage amidst a religious war between Catholics and Protestants with Catherine Medici stirring it all up.

The Messenger: The Story of Joan of Arc – The French/American 1999 film by Luc Besson captures this brutal time well. The life of Joan and her rise to become the saviour of France. Interesting if not a bit graphic and well, let´s face it history isn’t very light-hearted.

Ok, just one movie listed here instead of a thousand cook books we could have added, and it´s a bit fluffy but it is a start to all things French.  As Jean Anouilh said, “Everything ends this way in France – everything.Weddings, christenings, duels, burials, swindling, diplomatic affairs -everything is a pretext for a good dinner”.

Julie & Julia – (2010) Nora Ephron´s film about the indomitable Julia Child and her embarking in Paris on what would be a life long passion – French Cuisine. Her masterpiece became the book which in the 1950’s and 60’s earned a place in almost every North American kitchen, “Mastering the Art of French Cooking”.

Chocolat – There isn’t a whole lot not to enjoy about Johnny Depp and chocolate.This is a warm story about a mother and daughter who open a chocolate shop in a small French village and explore in a touching manner, the themes of life.

We also had to include one that can be easily found, French Kiss. If you like the French countryside and/or the idea of falling in love with the French man, this is a happy but somewhat sappy one.

Amélie (Le Fabuleux Destin d’Amélie Poulain) is a lovely movie set in Paris (particularly the Montmartre area) with a wonderful soundtrack. Amélie decides to change her life by helping others around her with a quirky sense of justice.

A really fun but black humour film is Tatie Danielle and the tagline, ““Vous ne la connaissez pas encore, mais elle vous déteste déjà.” – “You may not know her yet, but she hates you already.” says it all.  A benign lovely elderly lady, goes to live in Paris with family but all is not what it seems and she is actually pretty malicious. She is left in the care of a young woman when the family goes on holiday and meets her match.

Top Movies about Cycling in France

One of our personal favourites – it does give a flavour of European Cycling,which the area is known for is with parts filmed on the Belgium cobbles and as well in the French Pyrenees and Alps – Le Velo de Ghislain Lambert. A French / Belgian film by Philippe Harel staring Benoit Poelvoorde, Jose Garcia & Daniel Ceccaldi – A very humorous movie about trying to become the best you are and accepting what you find out. Ghislain, an amateur cyclist who comes from a Belgium farm, has big dreams about making it as a great cyclist. With the help (or hindrance) of his brother we watch his progress to the top with its hilarious consequences.

Les Triplettes de Belleville is a French-British comedy thriller animation (2003), directed by Sylvain Chomet. Also known as Belleville Rendez vous, the solitary Madame Souza is resolved to do all she can to cheer up her sad orphaned grandson, Champion. When she discovers his passion for cycling, she buys him a bicycle and starts to train him so that he can enter the Tour de France cycling competition. The years pass, and Champion, now a fit young man, has every chance of living up to his name. But during the Tour, he is kidnapped by sinister black-clad gangsters and taken across the ocean to the seedy city of Belleville. With her trusty dog Bruno, Madame Souza sets out to rescue her grandson.

Tour de France – Overcoming A fascinating look behind the scenes at the 2004 Tour de France, following the Danish Team CSC’s experiences and featuring the manager Bjarne Riis, and his group of cyclists including Carlos Sastre, Ivan Basso, and Michele Bartoli