A Complete Guide to Olive Oil in Spain 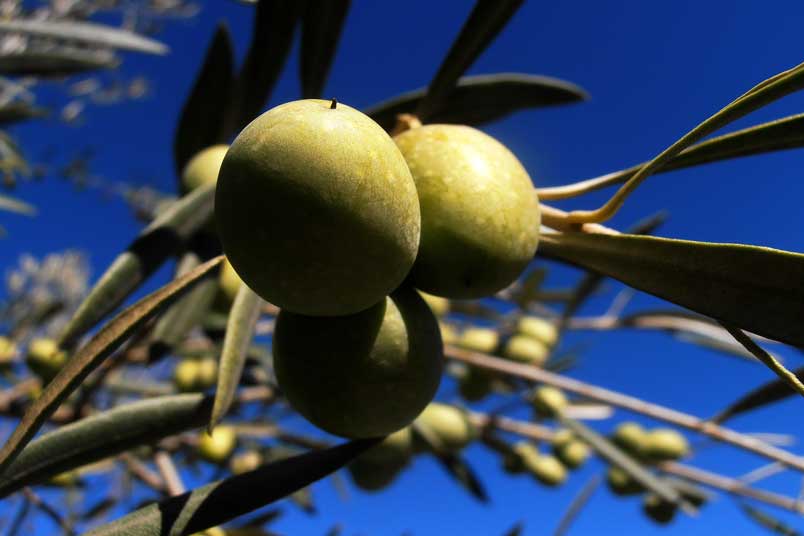 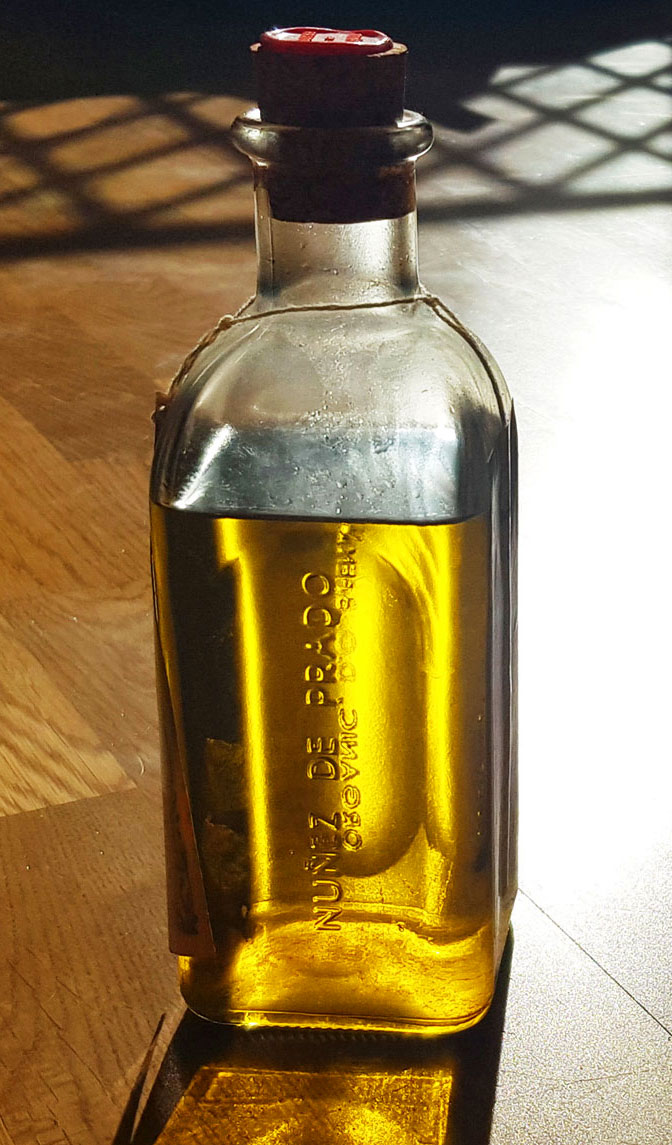 A complete guide to olive oil in Spain explaining the history, harvest and enjoyment of Spain’s favourite tree fruit.

When many people are thinking of putting up a Christmas tree right now, there is one tree, seeing much more action in Southern Spain, the olive.
It’s harvest season!
In this drought stricken country of Spain, we are preparing for the rivers of oil to flow soon.

THE MOST POPULAR TREE FRUIT IN IBERIA

This useful tree and its fruit is what makes up the rich social cultural fabric of thousands of years of civilization around the Mediterranean. By scrolling through archaeology, art and literature references you can see there is a virtual Who’s Who of lovers of the Olea europaea. In providing you with a complete guide of olive oil in Spain, means exploring its history, harvest and the enjoyment by the Spanish of this lovely fruit and how integral it is in modern day Spain’s culture. 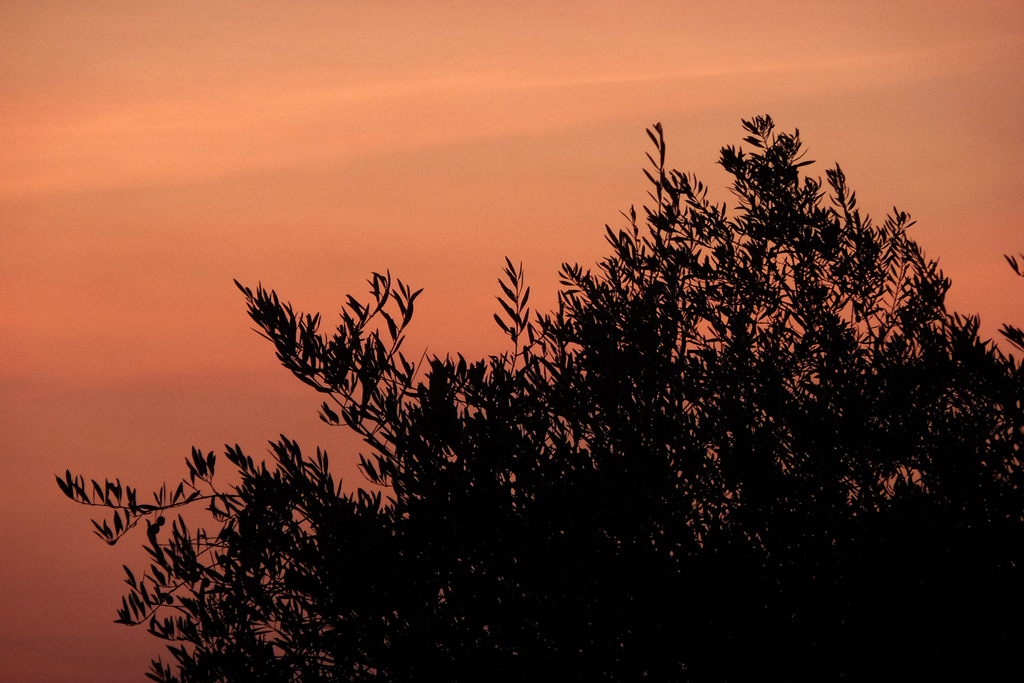 THE HISTORY OF THE OLIVE

Thousands of years of stories, lives and myth include the olive. Firstly, in Greek society, it was used in their lamps and fireplaces to light and heat their homes, as a symbol of truce, during peace treaties and purity, in marriage rites. Additionally, according to Hippocrates, olive oil was used by the Greeks for more than 50 pharmaceutical applications like ear, skin infections to gastro problems.  Don’t forget as well, the first Olympic athletes were massaged with it, given vases filled with oil as gifts, and victors, wore olive wreaths, “kotinos” on their heads. Further to playing a huge part in day to day life, in Greek mythology, an olive tree was gifted by Zeus’ daughter, Warrior Athena to curry favour in order to wrest control of Athens from Posedian and as well, Hercules performed his 12 labours with an olive wood club.

THE OLIVE IN SOCIETY

Recommendations on its tasty health properties? 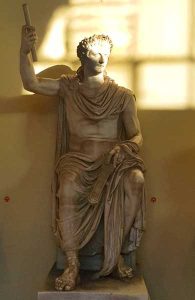 The Romans (who inhabited Spain & Portugal) believed that Minerva, Goddess of health, cultivated olives. Roman society prided themselves on recognizing good olive oils.  Their party trick? Be blindfolded and being able to distinguish through taste and smell, where the olive had sprung from. This has not changed, for even today, Spaniards around the country, will argue the merits of their preferred olive oil supplier, attesting to its superiority.

Religious significance of the olive is many. Indeed, in Islam, the olive is the illustrious Tree of Blessing, giving the light of Allah to the world. Let alone, Egyptian priests assigned its oil for important sacrifices. The Bible itself, only mentions the olive tree about 200 times! Additionally, olive oil is the preferred oil of anointing in Christianity and is a very important symbol in it along with water, wine and bread. Sounds like a perfect afternoon doesn’t it? What’s more, it is also the famous symbol of reconciliation between God and humankind. 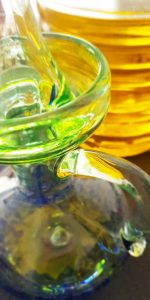 “And the dove came back to him in the evening, and behold, in her mouth was a freshly plucked olive leaf. So Noah knew that the waters had subsided from the earth..” Genesis 8:11 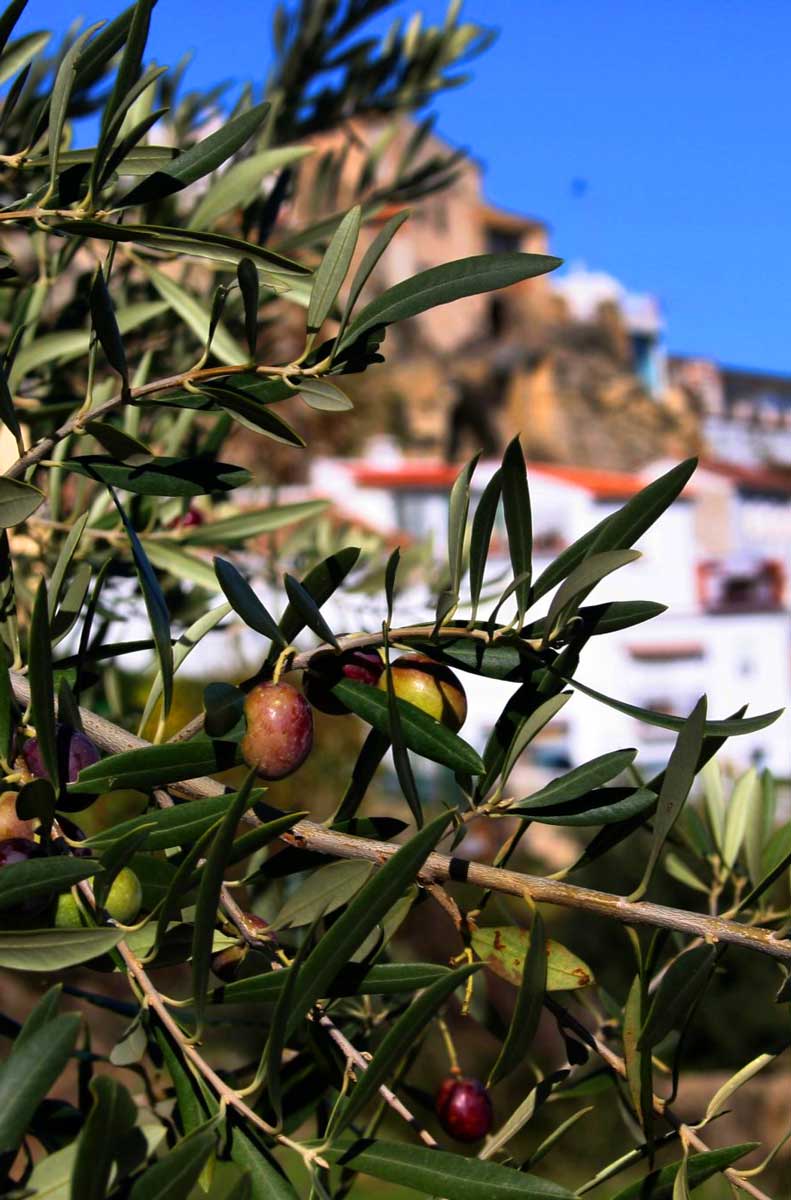 In fact there are so many references to this esteemed green fruit and ancient tree of the Gods, that it is amazing, we all don’t have one set up in our living room, year round. 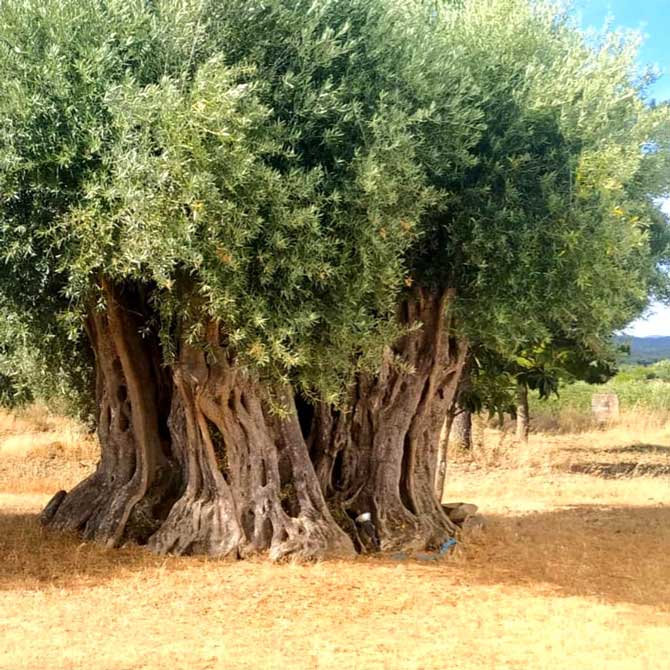 WHEN ARE OLIVES HARVESTED IN SPAIN

When baubles start to be hung from Christmas trees, lovely olives hang now from the trees. That being the case, from Mid November to Mid January is the picking season in Spain. Thus, you will see, in small to large groves throughout the country, men and women beating the tree with everything from sticks to automatic tree shakers in order to pluck these little fellows and turn them into Liquid gold. Brought to Spain by the Phoenicians almost 3000 years ago, cultivated by Romans, developed and named by Moors, “al-Zat” (where the Spanish word, Aceite “oil” comes from), enjoyed by us today, it is perhaps the most illustrious of harvests in this area of the world. 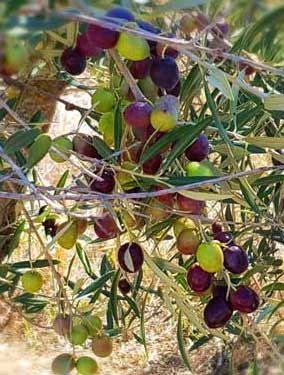 Black olives and green olives come from the same tree. They are only separated by picking times, the green being the youngest.

Amazingly, Spain has about 262 varieties of olives which results in over 1.79 million metric tons (in 2019) of the stuff in harvest time. Thus, supplying the world with about 50% of its quota. In fact, Jaén the largest olive oil producing province in Spain, gives more than Italy and Greece combined. It isn’t a surprise then when you drive through it, that acrid greeny smell clings in the air, its millions of olives destined for the world. In fact, so lucrative, this year’s harvest in Jaén was overseen by Spanish Guardia Civil police due to increased threat of olive pinching. 2020 saw a 35% increase in such theft, with a loss of almost 120,000 kilograms. Consequently, today over 1000 police officers are standing guard over these little bomb shaped fruits in the groves, on horseback, and by helicopter all hours of the day. 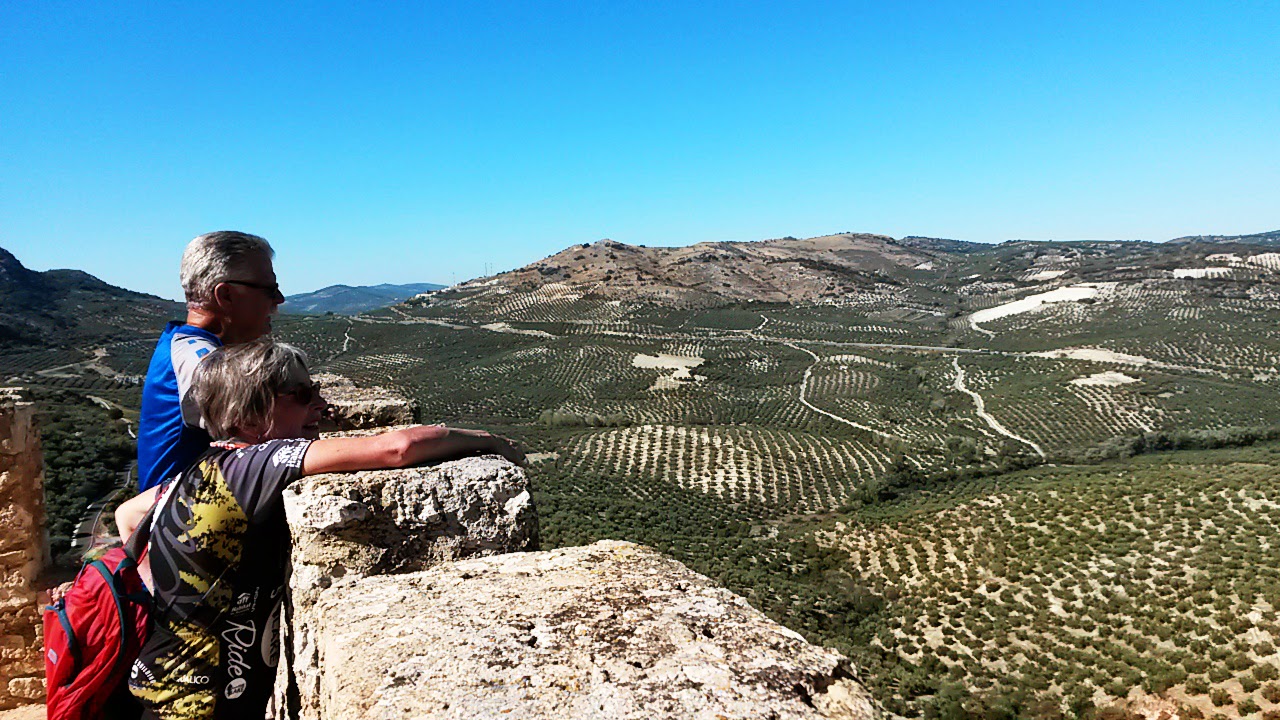 WHERE IN SPAIN DO OLIVES GROW?

Furthermore, of that half of the world’s content, 50% of all Spanish olive juice comes from sunny fertile Southern Spanish province of Jaén, with the rest from Córdoba (33%), other Andalucian provinces, and then followed by regions like Extramadura, Castile, Catalunya, etc. Here in Jaén the most common olive is the Picual, name due to its tiny pointy top (pico) with the Hojiblanco popular elsewhere with its fruity nutty taste. With these big numbers in mind, for olive eating lovers it is hard to believe that only 10% of this yield is used for “tapas” olives!  One of the real favourites here being the Manzanilla olive marinated with anchovies, a satisfying tasty snack with a cold cerveza. 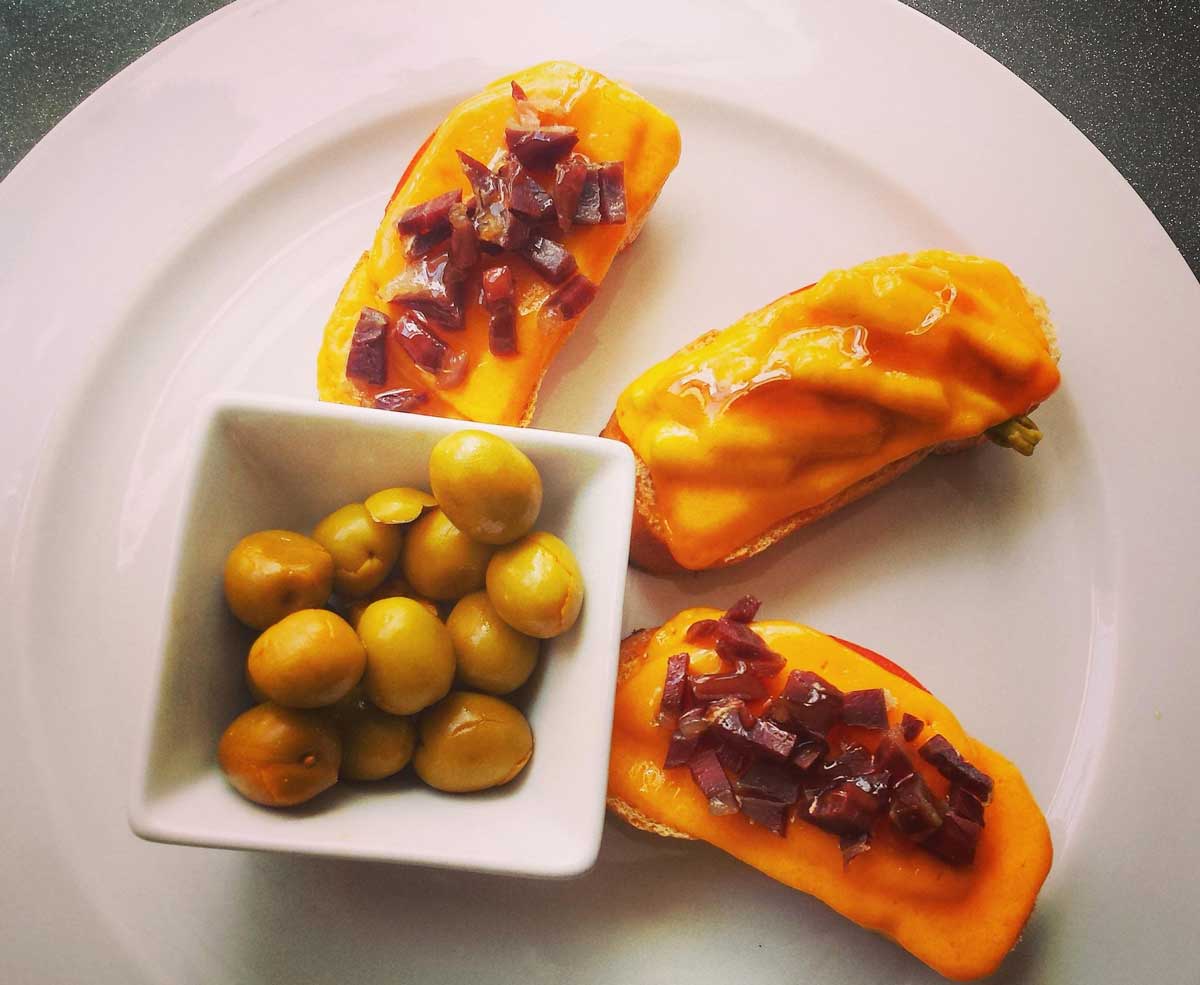 “Happiness is … finding two olives in your martini when you’re hungry. ” Johnny Carson’ 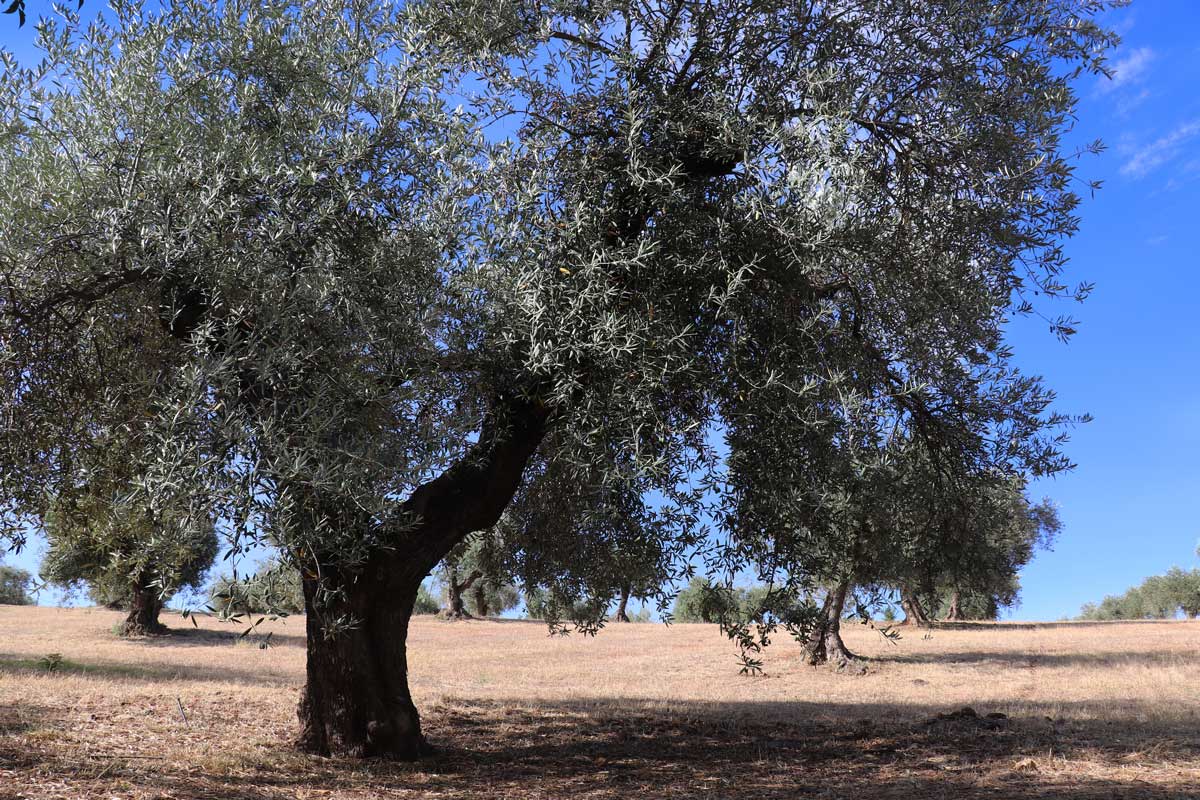 HEALTHY PROPERTIES OF THE OLIVE

Extra Virgin olive oil has extremely high levels of the healthy monounsaturated fat (approximately 73%). Due to its cardio-protective properties, that lower blood pressure and helps prevent hardening of the arteries, Mediterranean populations, who consume a lot, seem to also have very low rates of heart disease deaths.
Studies also show that an olive oil rich diet helps in preventing Alzheimer’s and depression.
Saying that, olive oil is 100% fat, right? Having 120 calories per tablespoon, moderation is needed too, despite its deliciousness!

WHY ARE OLIVES SO SALTY?

This has to do with the brine they are generally packed in to remove their naturally bitter taste. Really, you do not want to eat one off a tree. I have seen tourists overcome with curiosity and well, they regret it.. big time. Natural olives are extraordinarily bitter, so you need to soak them to rid them of the compound, oleuropein, which makes up almost 15% of them. Adding salt to the water only aids the process to be quicker. 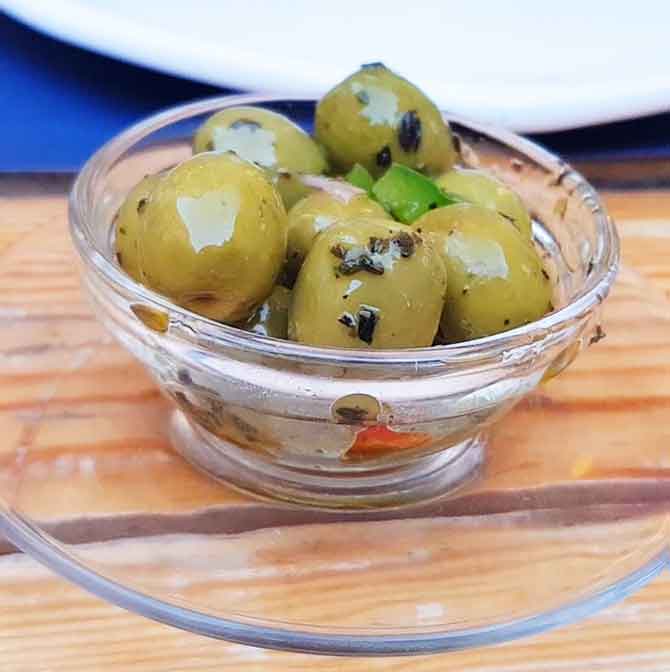 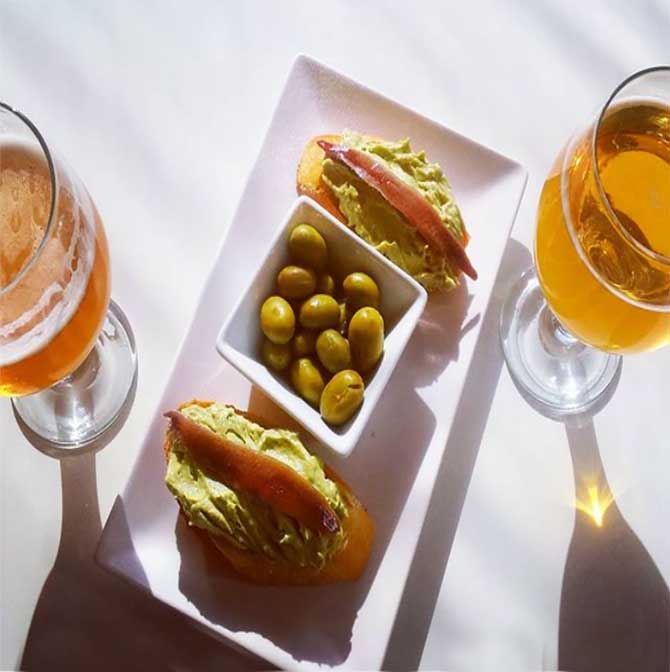 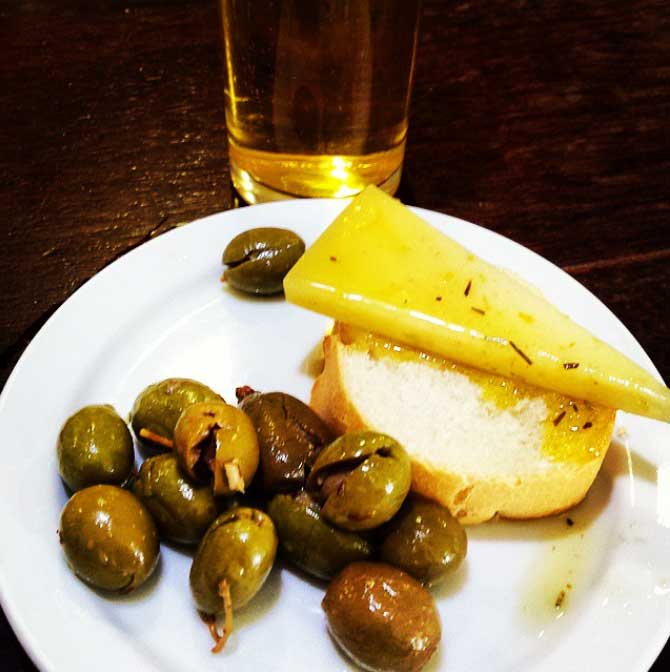 HOW DO YOU MAKE OLIVE OIL?​

All virgin olive oils are made the same way by mechanical extraction.
First there is :

That’s it. Simple but effective. 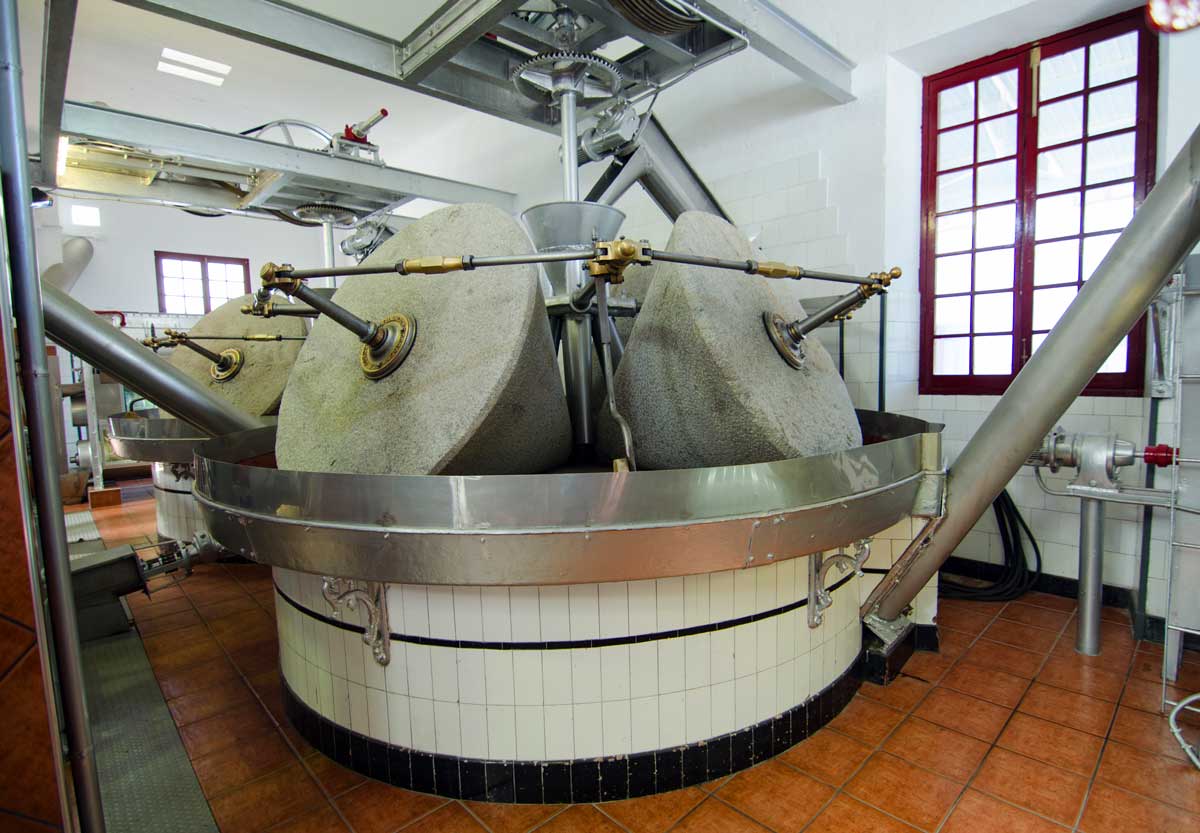 TYPES OF OLIVE OIL TO LOOK FOR

If shopping and confused, here are the types of olive oil grades you should look for or avoid. In the first place, olive oil falls into two main categories: virgin olive oils and refined olive oils (blended or processed).
Extra virgin is a grade of virgin olive oil.

WHAT IS VIRGIN OLIVE OIL?

Let’s talk about the most popular. “Aceite de Oliva virgen” Virgin Olive Oil is oil expressed without changing its properties, so no heating or chemical processing. Within this are several types of quality markers. Confusingly, “virgin olive oil” is one of them too.

Extra Virgin olive oil is one type of Virgin oil and is the healthiest type of olive oil that exists and the best. Nothing is added to this type of olive oil, it is 100% natural, pure crushed young green olives (which have highest oil content). Yum. 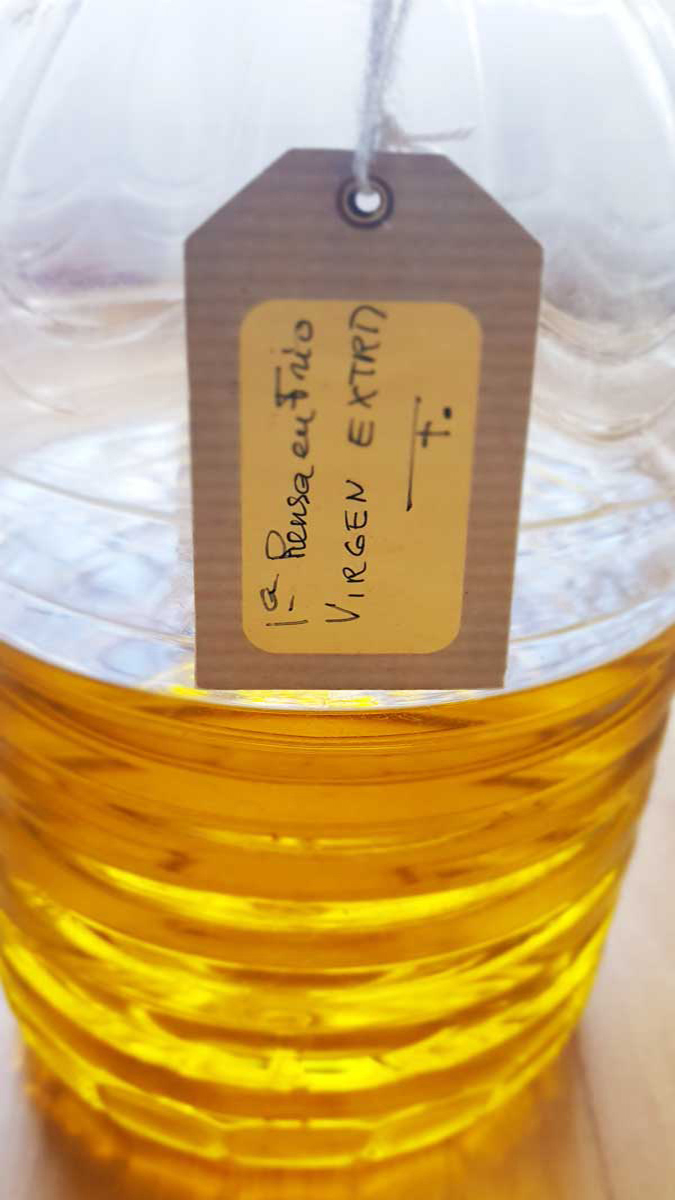 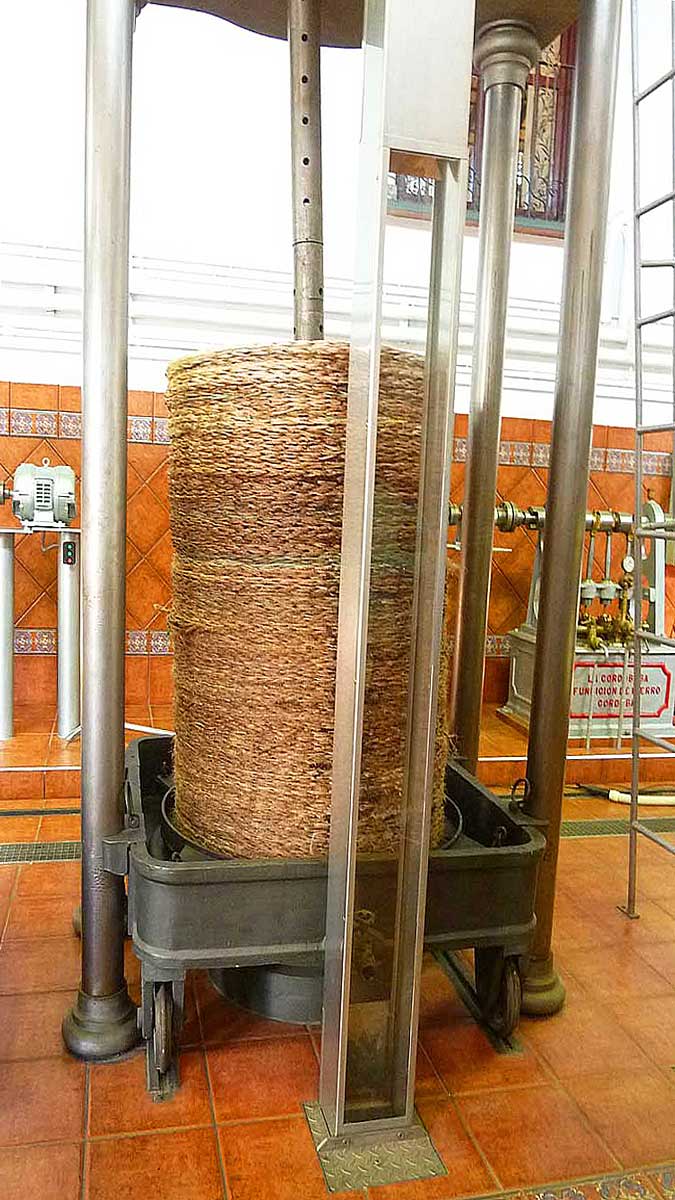 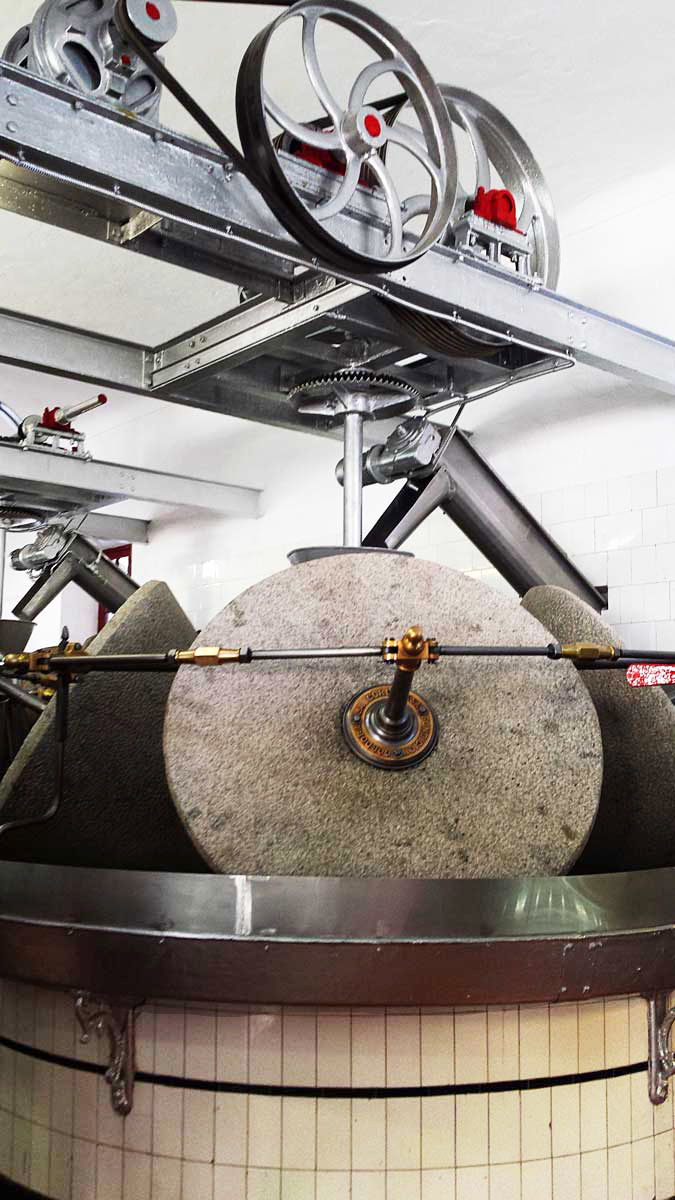 HOW DO YOU TASTE OLIVE OIL? – Doing it like a Pro

Bored some Sunday, grab a couple bottles from your local and get going.. who says the Romans had all the fun?
1. To really disguise the colour, you need a cobalt glass cup, but as this is just an experiment, a small cup / shot glass will do.
2. Pour some in and cup it in your hand, covering the top as well, in order to warm the oil up.
3. Inhale, concentrate on the smells
4. Sip some (sucking in air), hold it in your mouth and breath out through you nose, swallow
5. Like wine, look for those notes of fruitiness, nuttiness, bitterness or spicy, peppery..
6. On to the next oil, take a palette rest with a cube of bread or apple 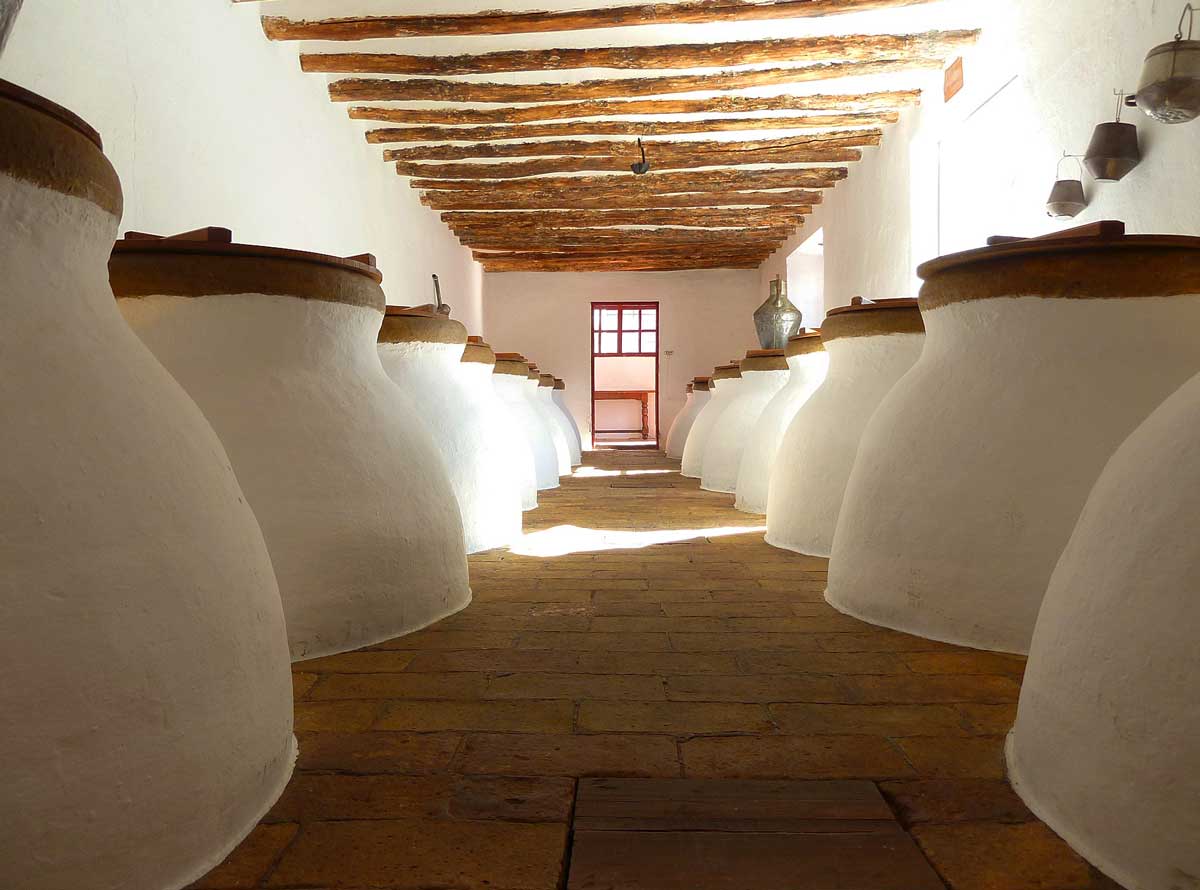 HOW TO BUY OLIVE OIL

Here is an easy tip – TIME, LIGHT, HEAT all damage olive oil.
When buying olive oil, go for a single olive variety rather than a blend, and as well, steer clear of transparent glass bottles. Beautiful as they are, olive oil is affected by sunlight and its heat.
Date wise, if possible find one that was harvested within the year.
Good oils go bad with time. 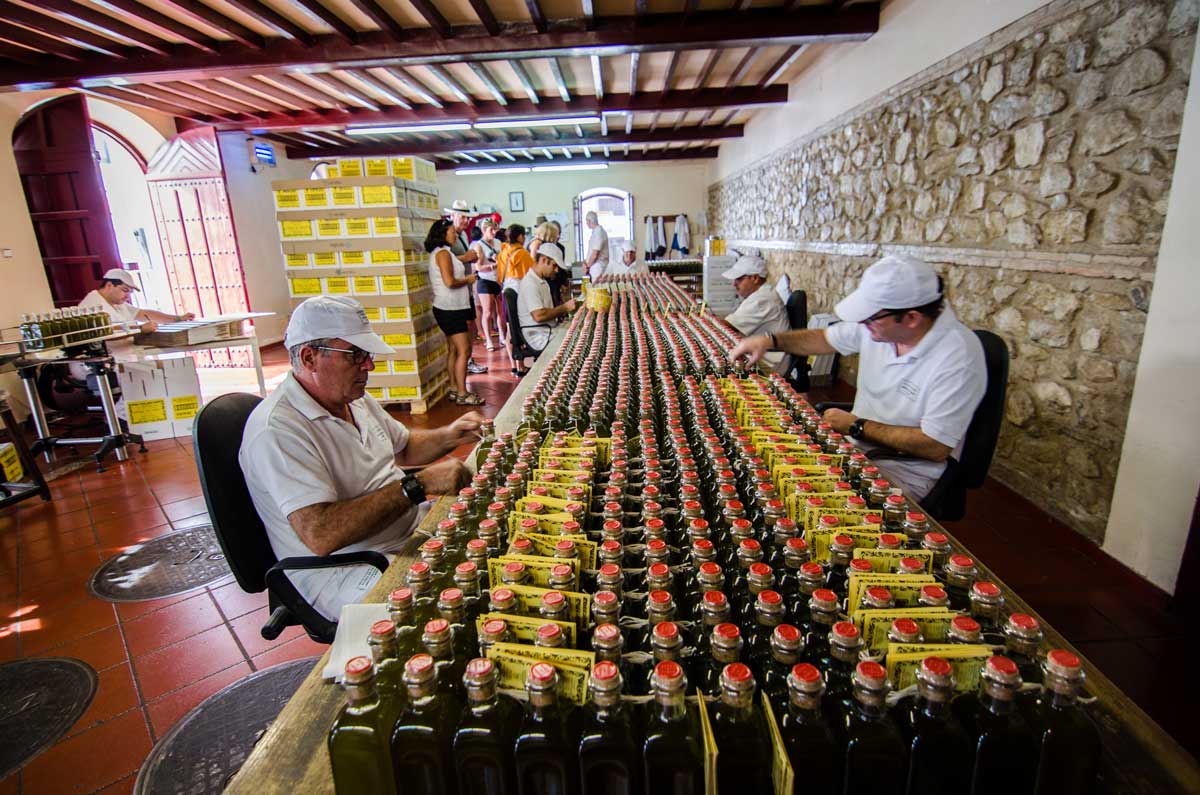 Any kind of musty, mouldy or rancid taste means it is off. You want a clear bitter experience. Another sign of bad oil is a metallic taste if it has had too much contact with metal bins.

“Some martial arts are very popular, real crowd pleasers, because they look good, have smooth techniques. but beware.They are like a wine that has been watered. A diluted wine is not a real wine, not a good wine, hardly the genuine article. Some martial arts don’t look so good, but you know that they have a kick, a tang, a genuine taste. They are like olives. The taste may be strong and bittersweet. The flavour lasts. You cultivate a taste for them. NO one ever developed a taste for diluted wine.”
Bruce Lee

We are fortunate to live in olive oil growing country and are partial to the picante oil taste in the Antequera region near Málaga. Our absolute favourite olive oil, though comes from a family firm established in Baena, Cordoba province in 1792, Nuñez de Prado. They lovingly create the “Flower” of the oil, using large centrifugal rollers of years gone by to slowly extract that precious oil. They were one of the first Almazaras (Olive Presses) to go organic in the area as well. It is subline and we go through beautiful bottles of the stuff. If you are so lucky to see it in your Whole Foods, splurge and buy it! 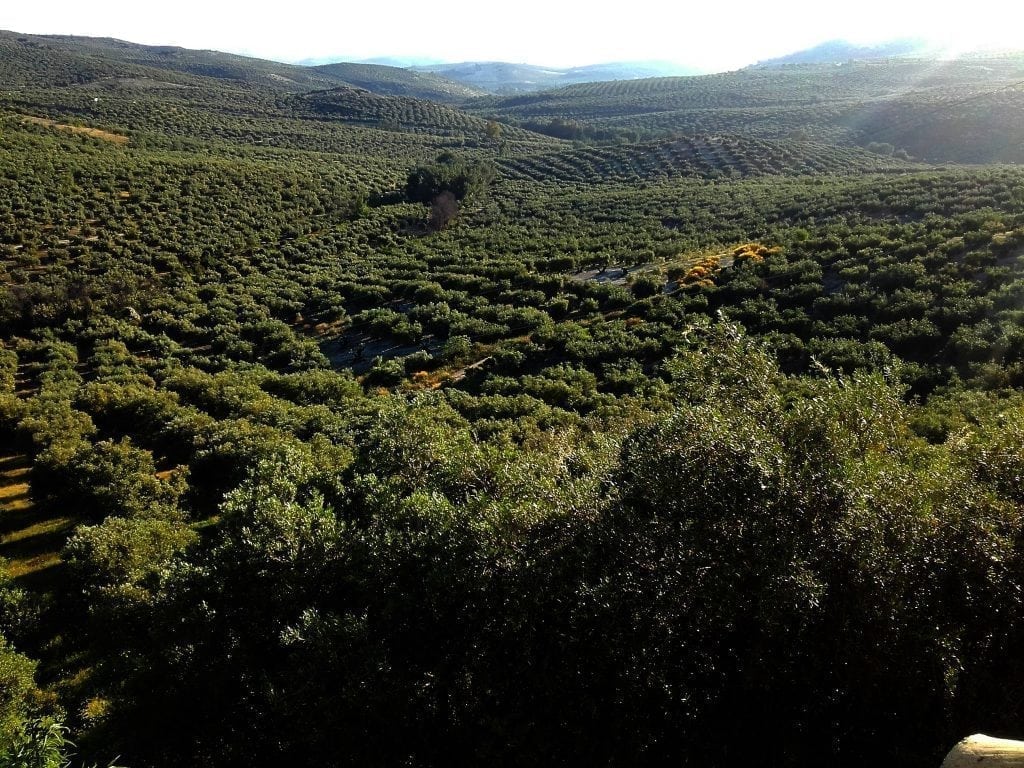 Internationally, Spanish oil has come into its own. When Italian oils seemed all the rage in North America, curiously, very few people knew that many of those “Italian” bottles of oil in the supermarket are blended with Spanish oils to make up the quantity or sometimes, just only bottled there!  In fact, the WBOO’s, (World’s Best Olive Oils, a non-profit non-government organization) annual vote for 2021, named the top 10 Extra Virgin olive oils worldwide, with the top 9 out of 10 being from Southern Spain, the 10th being from Castilla La Mancha, Spain!

However, buy a Spanish oil and you know it will be nice. Used for everything from desserts to skin care (the olive oil soap from Castile was once renown worldwide), it’s not just for dressing a salad. I once was given a 10litre bottle of golden homemade stuff, just for doing someone a small favour.

It’s just like that here.
Everyone loves it and takes pride in it.
It’s just a part of who the Spanish are and is a gift you know which will be well received and well used.

Look for these lovely Olive oils on your Spanish Bike Trip