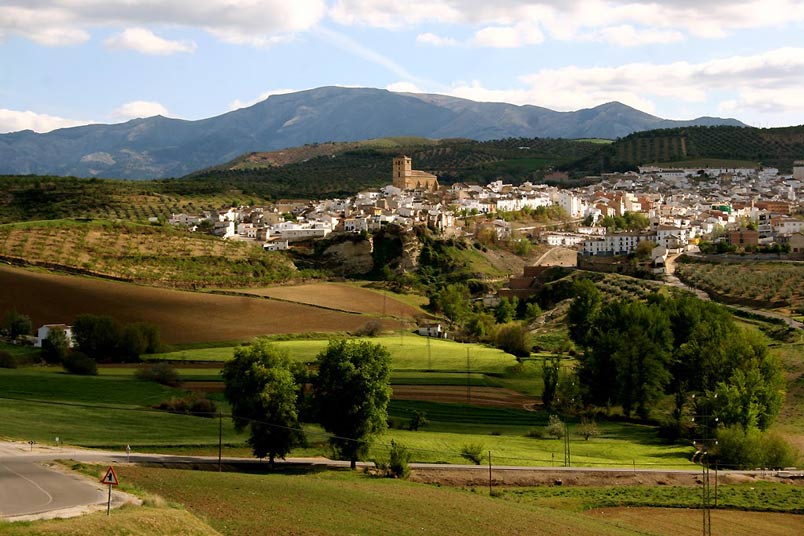 If you are keen for a laid back stay, visit Southern Spain’s most beautiful town, Alhama de Granada.  Perfectly situated, it is close enough to Granada to see its magnificent Alhambra Palace and Sierra Nevada and only a short drive to the Med.  It is charming in every aspect and has a lot to offer the visitor in things to do.

What is the best thing about rural Spain?

With the sirocco wind that carries the exotic African scents of jasmine and cedar trees and bathes Southern Spain in a delightful hint of medieval Moors and shades of Scheherazade, you could almost forget modern day worries like needing to pay your taxes on the internet.  This is where my husband and I have transplanted to, away from the pollution and crowds of city life.  To Alhama, where shepherds are a common sight and stone doorways in the town are carved with dates when in my birth country, North America’s shores were only known to the First Nations who hunted and fished there.

Winding around the valley floor of the Valley Genil, a river that comes from the heights of the close by snowy Sierra Nevada, you crest over the last hill to find the market town of Alhama de Granada.  Sheltered by the rolling Sierra Tejeda, its dark forests and rocky paths have stories of civil war Maquis guerrillas and Arabian princes. A place of history, most visually in its medieval heart. 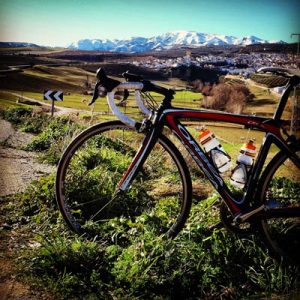 Romantically perched atop a swelling landscape of vast poppy and wheat fields it is only 50km from either the Mediterranean Sea, Málaga, Marbella or from Granada the cultural epicentre in the province (if not the country). It is a small place that packs a punch visually as well as historically and is a real find for visitors who are looking for the rustic Spain of Hemmingway & Washington Irving. It is one of Southern Spain’s most attractive rural towns with a bustling farming community of vegetable, almond, olive and wine production.  Alhama de Granada should surely be on your list to visit. 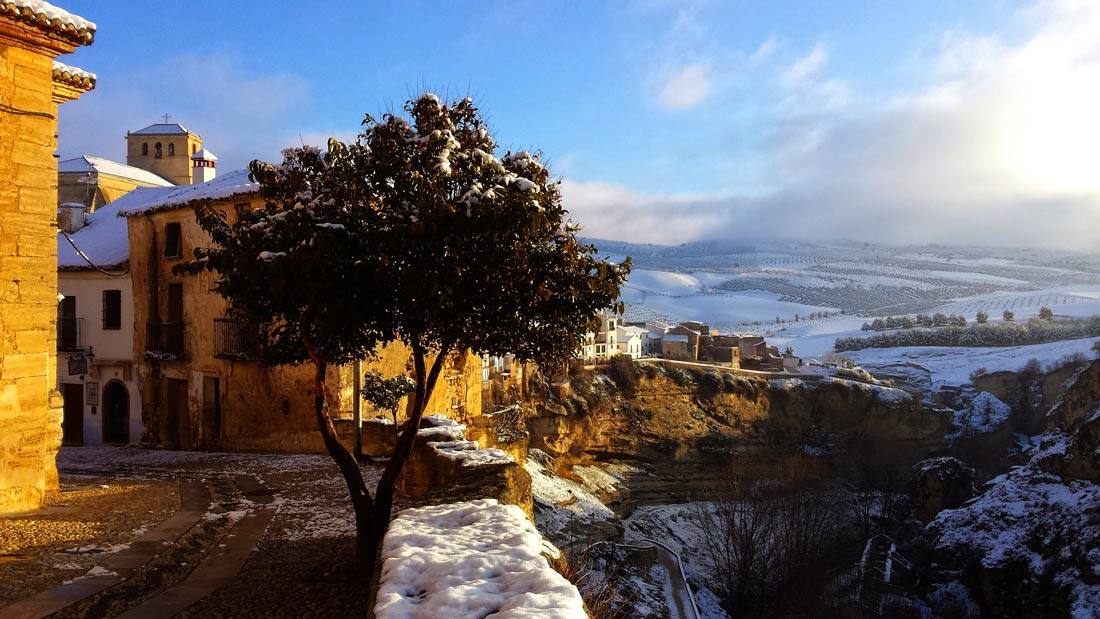 Top 10 Things of What to See and Do in Alhama de Granada, Spain 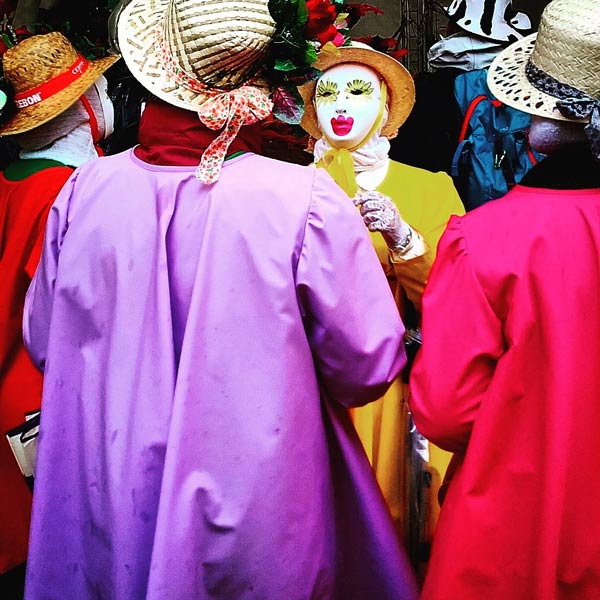 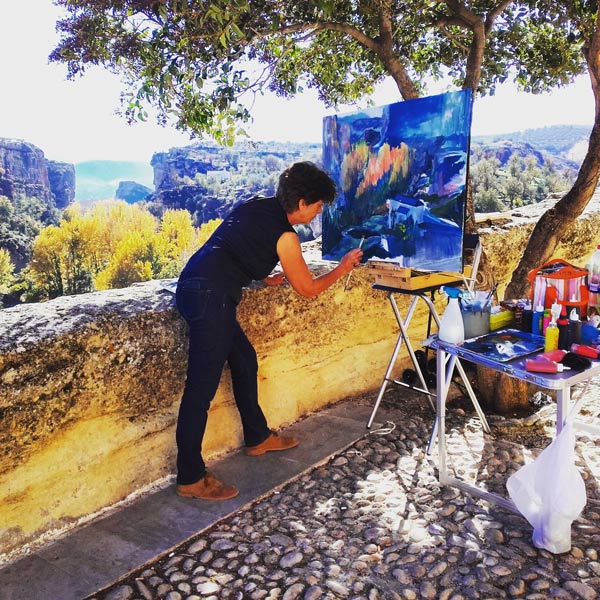 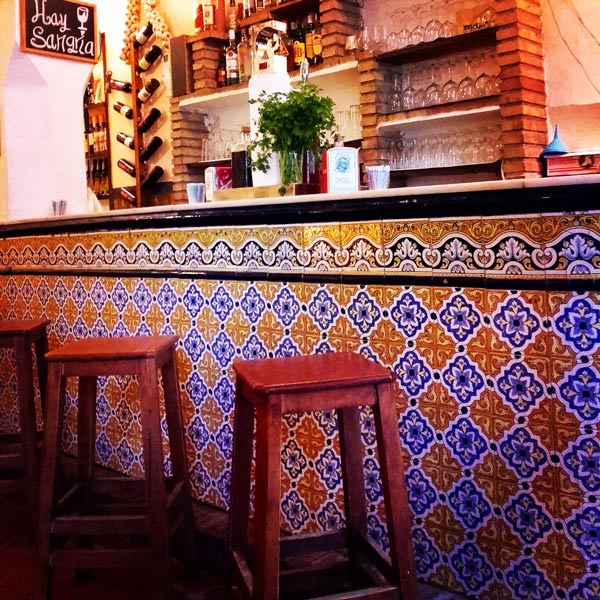 What to do in Alhama on your visit

As you drive around the curving roads, you come upon Alhama. Its impressive medieval church ‘Iglesia de la Encarnacion’, dated from 1506, was built over a former mosque and today stands stalwart and commanding in the heart of the old town. The white Andalusian homes clustered around it like admirers. Surrounded by a rocky gorge like a movie scene set, the town evokes a poetic feel with a light, which dramatically changes through the day. The Sierra de Alhama behind, as an impressive backdrop.

Historically human reaction to this town has been similar and the intake of breath as one catches Alhama nestled in the bulwark of the Sierra de Alhama, Tejeda and Almijara mountain range hasn’t changed through the years.  References to the place are sprinkled through literature (Lord Byron and Miguel Cervantes) and history.  American Washington Irving, of Sleepy Hollow fame (and who has his own Cultural Route here) spent much time in the region. Robert Semple, President of the Canadian Hudson’s Bay Company, version of it when in 1809 he visited, entering through the ancient horseshoe shaped portal through the Mediterranean coastal mountains was memorable. 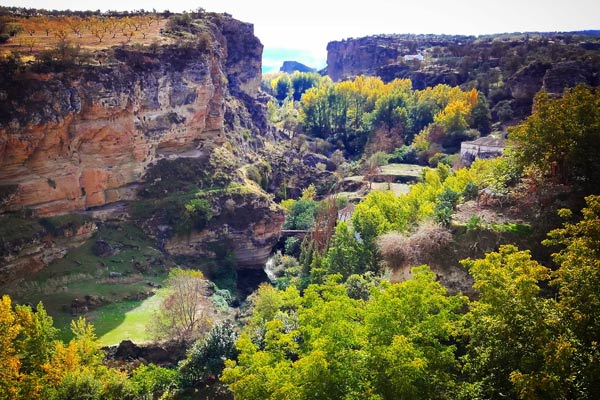 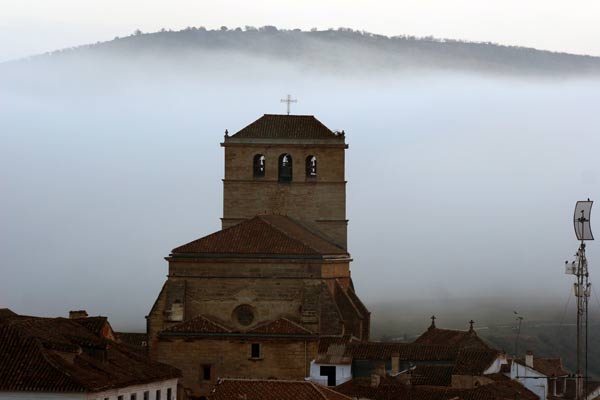 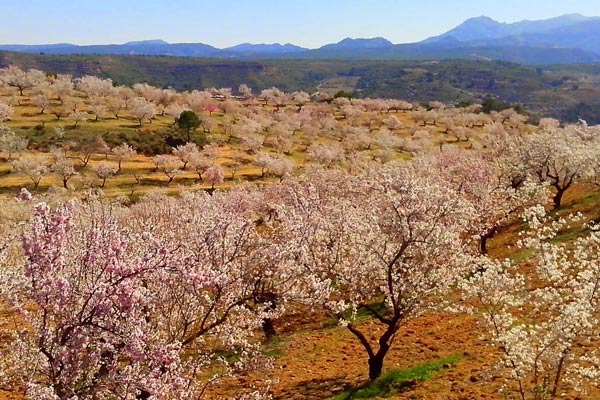 “After passing through a noticeably deep crack in the hills, we arrived in Alhama. It was only possible to make out the romantic outline of this town by the light of the stars.” 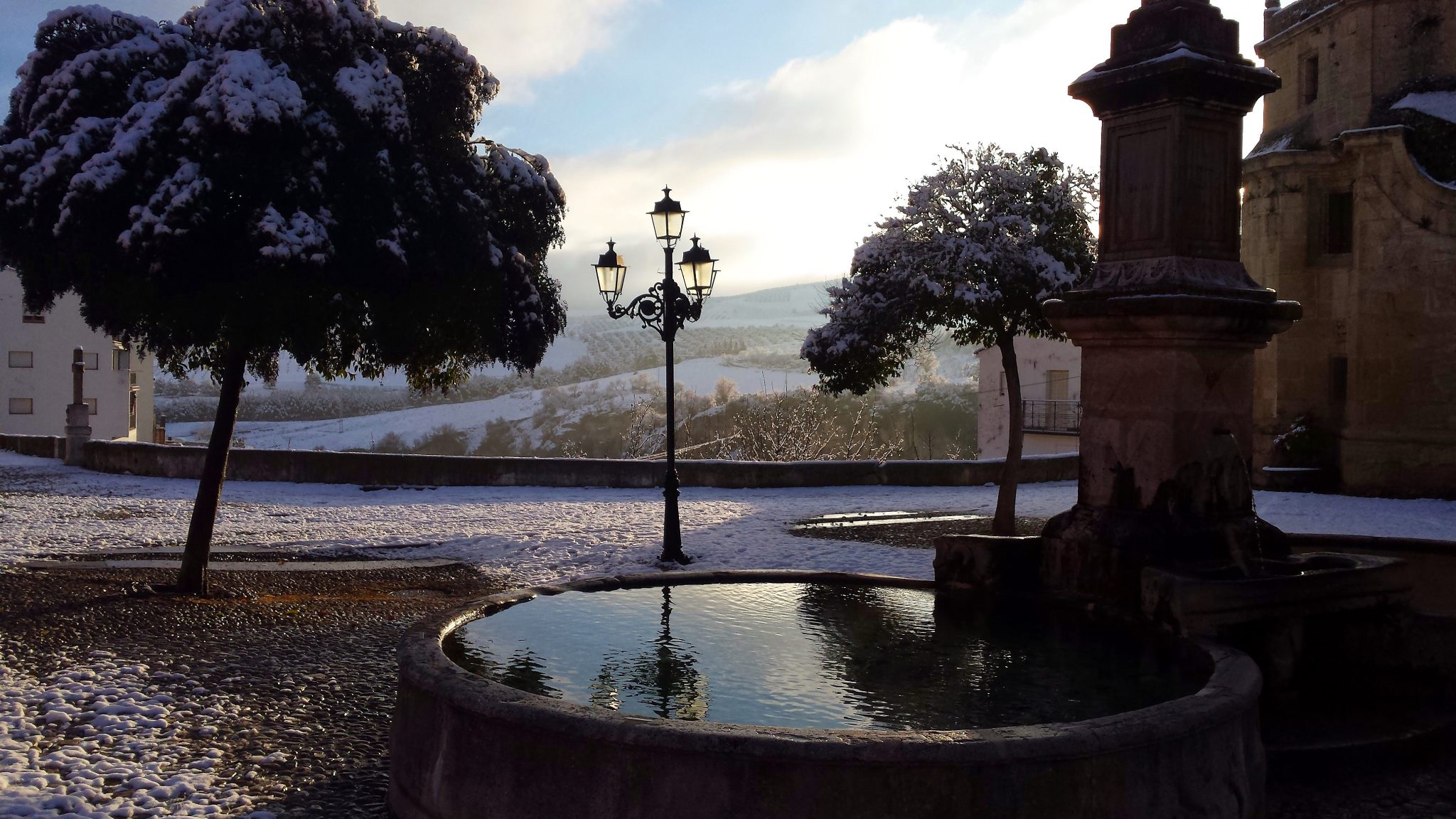 Nowadays you don’t have to wait for a bright night, as the two medieval churches, former synagogue, 15th century hospital with Moorish courtyard, and even the gorge are all attractively lit. Electric lighting doesn’t ruin the atmosphere of the ancient cobbled Arab quarter with its dusky indigos and golden interiors. However come out and stand on the hill in a crisp winter evening when there is a full moon and dusting of snow on the sierras and time stands still.  You will soon start planning to move to what we believe is Southern Spain’s most beautiful town, Alhama de Granada. 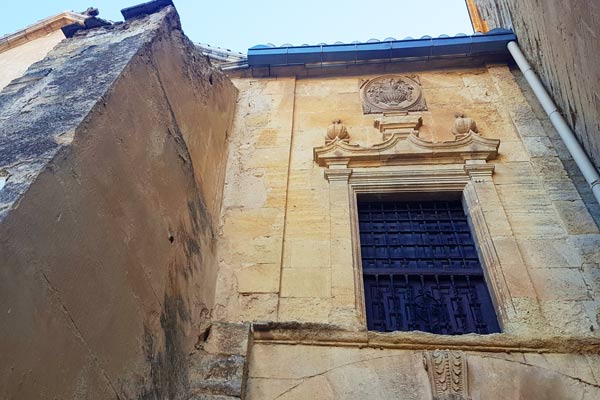 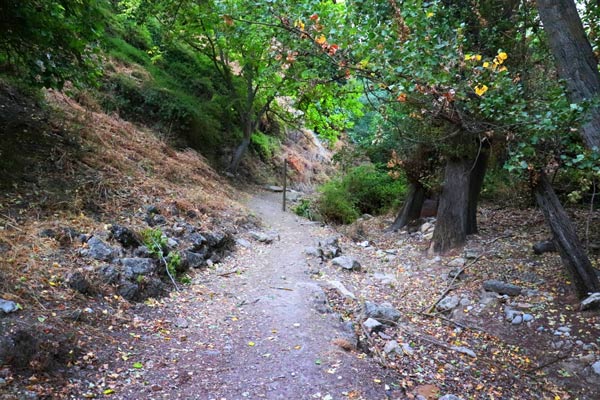 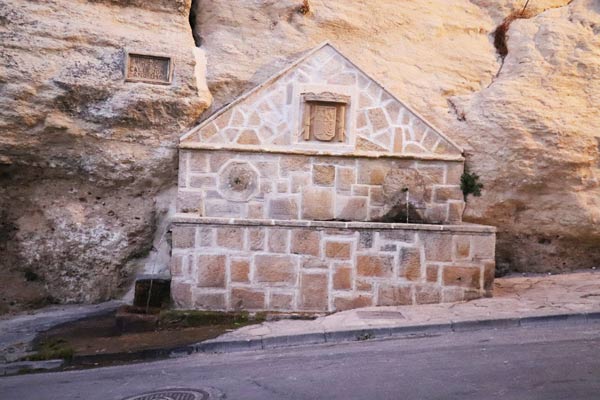 Abu Al-Hacen, Sultan of Granada, upon losing Alhama in 1482 to the Catholic fighters 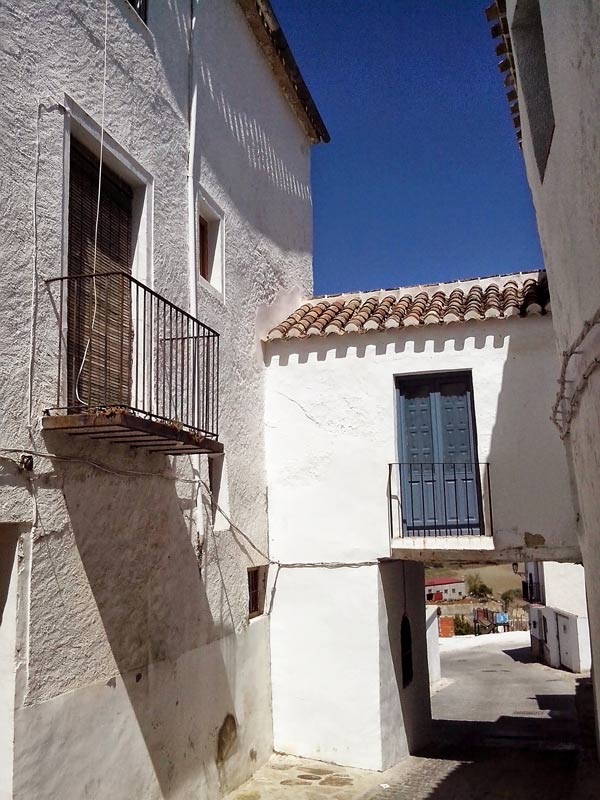 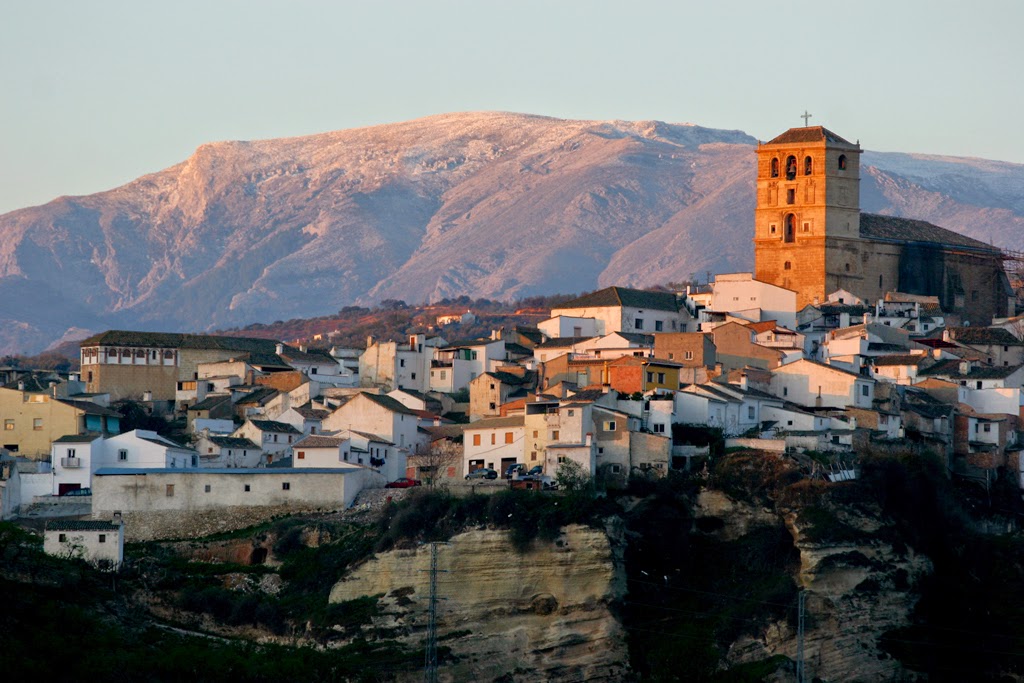 The interest in this area reaches back into the dimly lit passages of time with vestiges of Neolithic aged finds and burial chambers. However, it was the Romans who made a large impression on it drawn to its defensive position and hot springs, and naming it “Artigi”. You can still wander down into the gorge (where there is a peaceful walking trail between the tall walls) and walk across their stone bridges.  Close by,17km away in Salar village are magnificent villa mosaics, remains of these Roman communities, still being excavated in 2021. 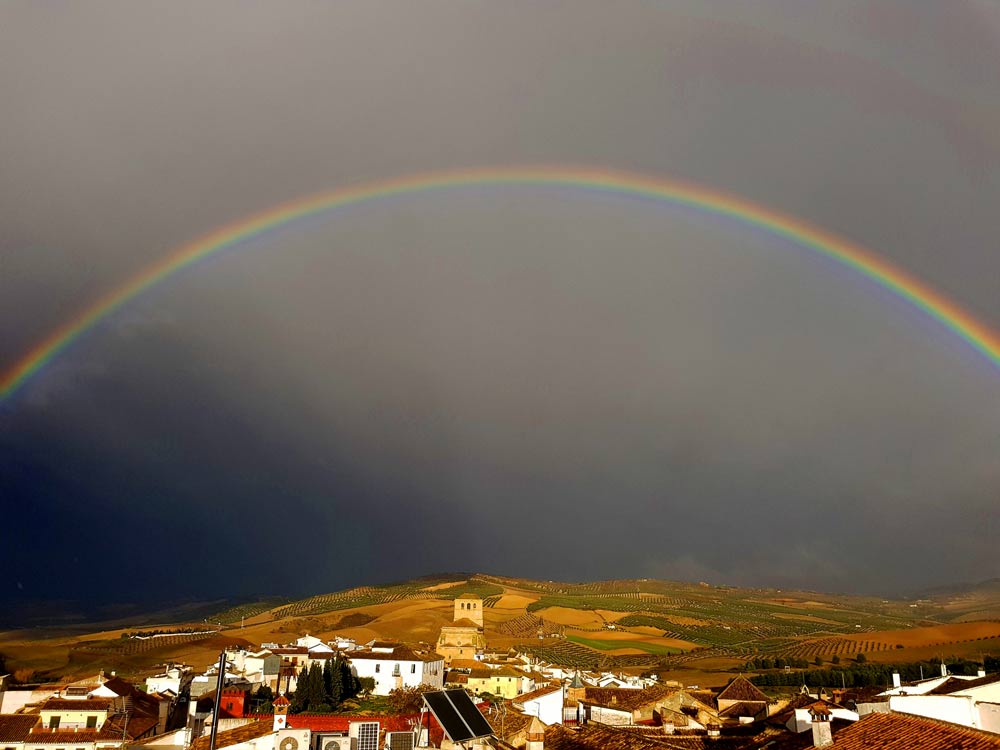 History of the Moors in Inland Spain

The Moors who would build Andalusia into a powerhouse of culture, art and scientific achievement for 700 years soon followed from Africa. It was their use of the “hammam” or hot baths, which gave the town its name in the 8th century, Al Hammam into Alhama.

Unique place in Alhama to Enjoy the Outdoors

Today, one of the nicest places to settle down for an hour is not just in the original hammam in the Almohade 12th century style now inside a hotel, but outside in the Alhama river (Rio Alhama), where the hot water is funnelled out to from the source. Amidst the shady overhanging trees you can while away the time with the locals in this bubbling oasis.

Like the passing of seasons, the Moors were soon swept away by a daring raid by the Christians during the Reconquest era. Alhama’s loss, directly contributed to the subsequent fall of their power base in the nearby city of Granada (at which time the Moors fled the Alhambra Palace and Spain). This cataclysmic event of 1482, evocatively told in prose by Lord Byron was the start of the end.  If you wanted even more proof of how important Alhama was during that time, the Encarnacion church has needlework on religious finery, the mighty queen of the Reconquest herself, Isabel, gave to Alhama in thanks. 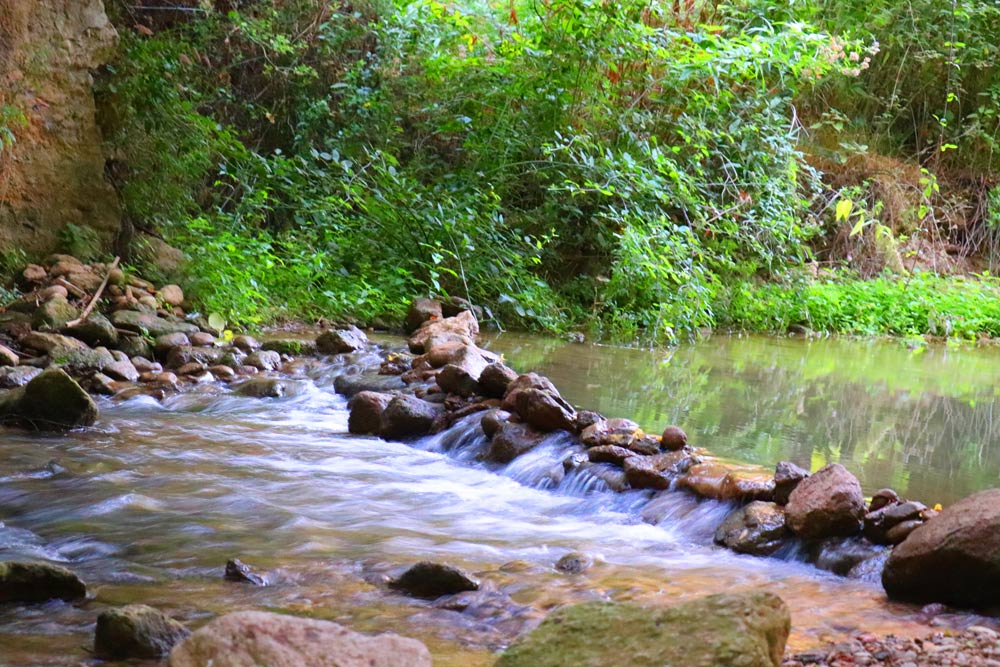 Surviving a rough history of a devastating earthquake in the 1884 and civil war battles has not been easy, but Alhama today is a peaceful place. One of the best spots to sit and contemplate life. That is unless you show up during one of its many ferias and festivals, like its crazy Carnival during February which is nationally recognized as being unique and one of the oldest in Spain.  Or its dynamic music or wine festivals, or its agricultural fair.. There is a lot of life in this old town yet! 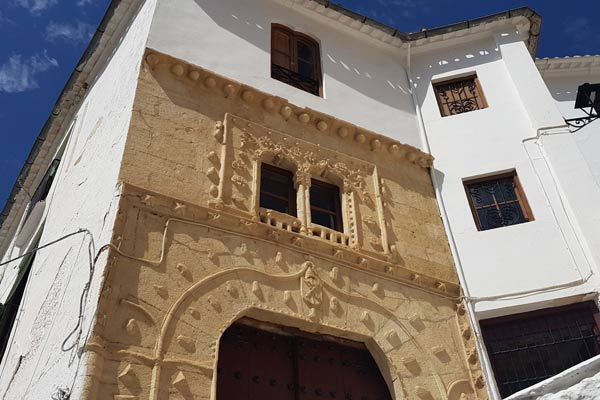 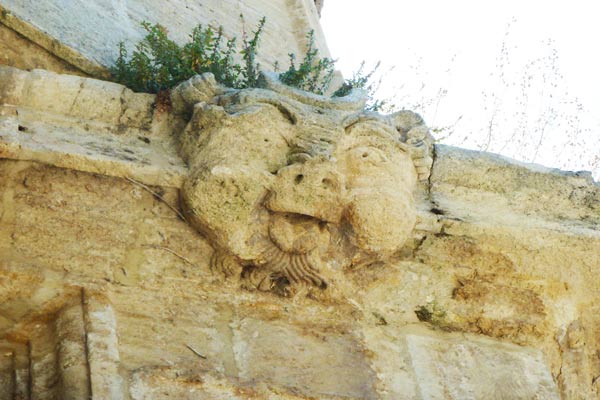 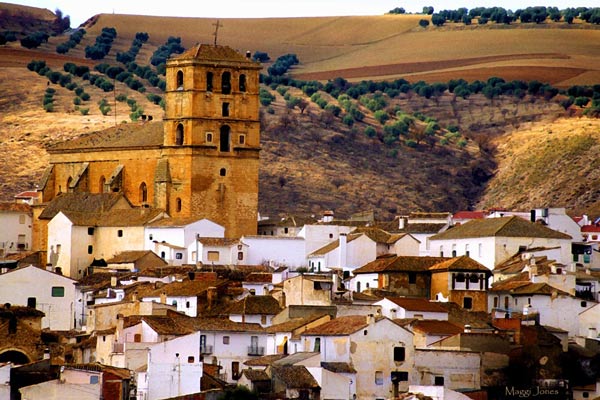 Having lived here for several years, we have settled in as the resident guiris (foreigners) and the townspeople around us have decided that although we are odd, we are generally not too offensive. They seem to have become quite used to our early eating times compared to theirs, which are more favourable to hours of the midnight snack and our strange adherence to drinking coffee from mugs and not their Arabic tradition of hot drinks coming in handle-less small glasses. 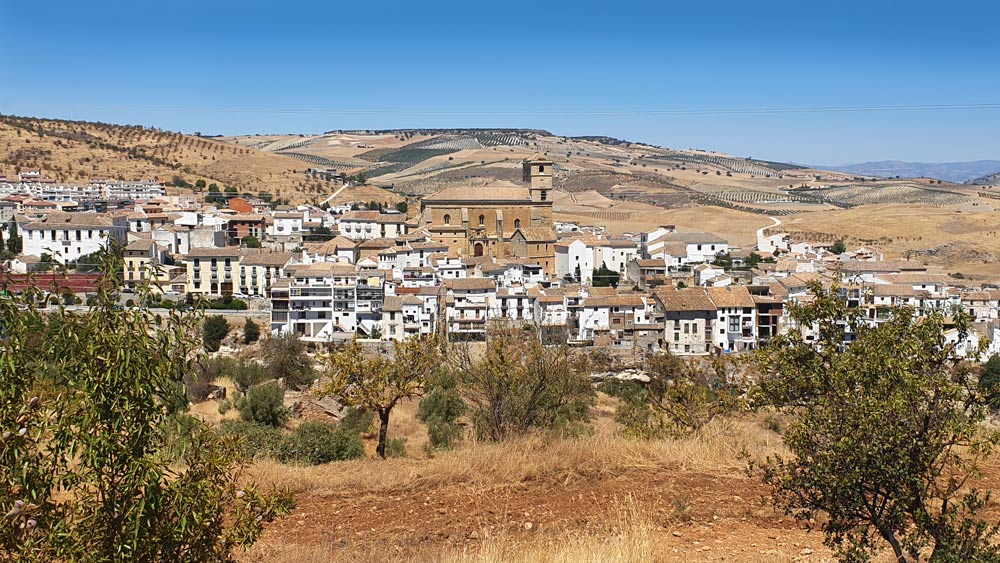 What to expect in Southern Spain

However, all of us share in the discomfort of summer days over 50 degrees and winter months, although which rarely finds snow piles lining streets, surely sees us all lining coats and wearing them inside as few people have any central heating system and tile floors are frigid!  A surprise for people thinking Spain is warm year round.

In both cases this increased our knowledge of Andalusian profanity (their habit of peppering everyday language with vulgarities is usually impressive, but in these times, exceptional). In terms of language generally, all credit is due to their perseverance for not going into hysterics when I slaughter their idiom.

Like the time I spent a whole morning talking to a local farmer about membrillo (or quince, a fruit which they do magical things with here) and its pulpo (octopus) rather than the more useful pulpa (pulp).  Trust me, I have made much worse mistakes than that though! Well, at least laughter transverses all borders. 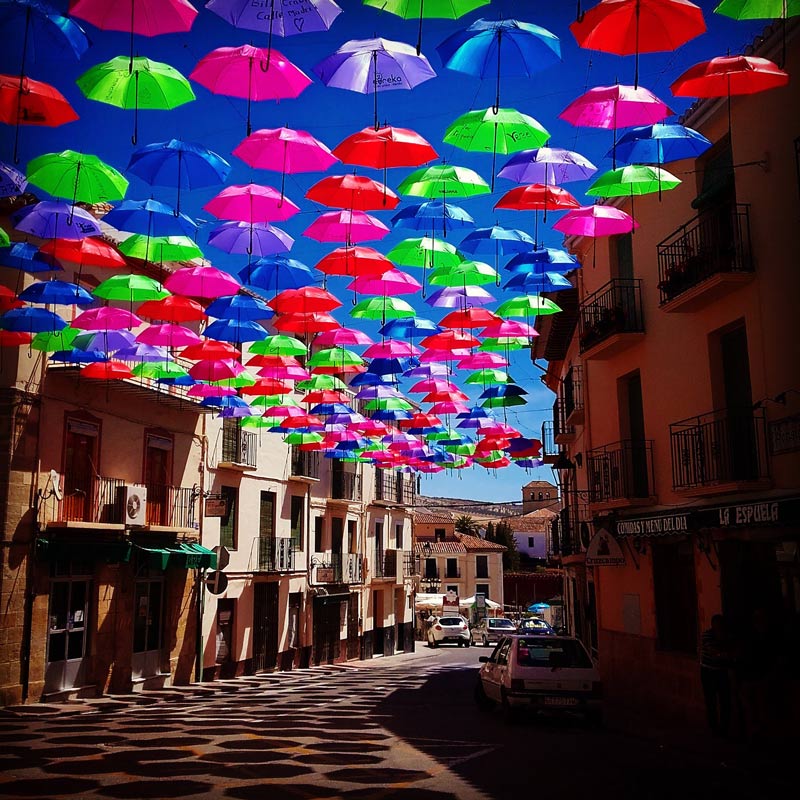 What are the best things to do in Andalucia’s summer!

We have also become accustomed to social engagements starting at 11:30pm and the telephoning of our Spanish friends to come out for the summer evening paseo, If it were just an amble around town, which is really only a couple of plazas and a main street, that might suffice, but these Andalusians love to catch up on the gossip (although it usually has only been four hours since you last saw them anyway). Thus, summertime paseos end up in a tour of outdoor tables in the plentiful number of cafes, cooing over babies and the antics of small children, sharing a tinto verano  (refreshing wine and lemonade mix) with a table of grandmothers and arriving home in the small hours.  It is a delightful quality of life and we wonder how we survived before without this tradition. 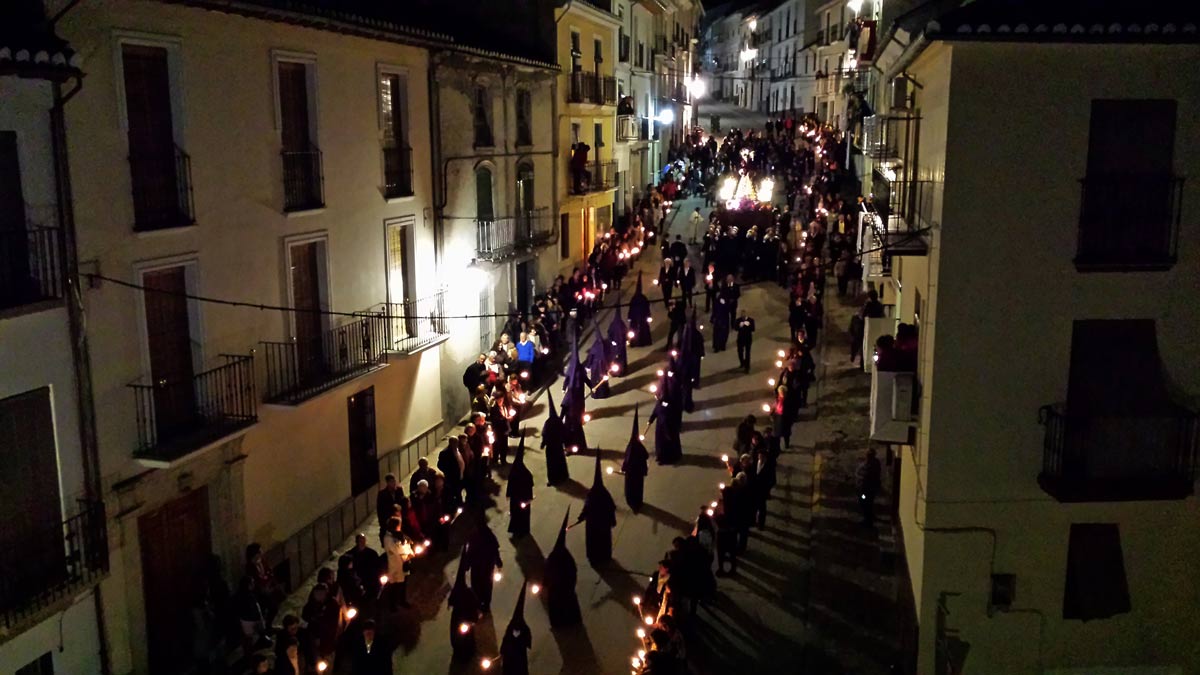 We’ve come to terms with the fact we just can not take the pace but they haven’t, and although their promises of “oh no problema, it will be very short,” they just can’t help themselves and press us to stay on into the early hours. “Don’t worry about mañana, today is more important. Be with friends, enjoy the cool air.” A lovely thought and said with true Andalusian corazon (heart), but I am secretly glad when the winter months begin to sidle up, when all this late night socializing will be restricted and I’ll be able to get some sleep. 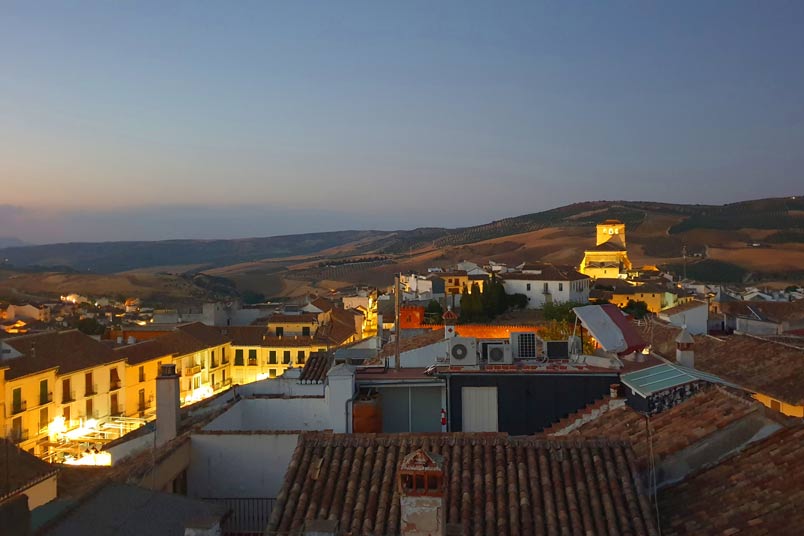 Visit when Alhama’s festivals are on 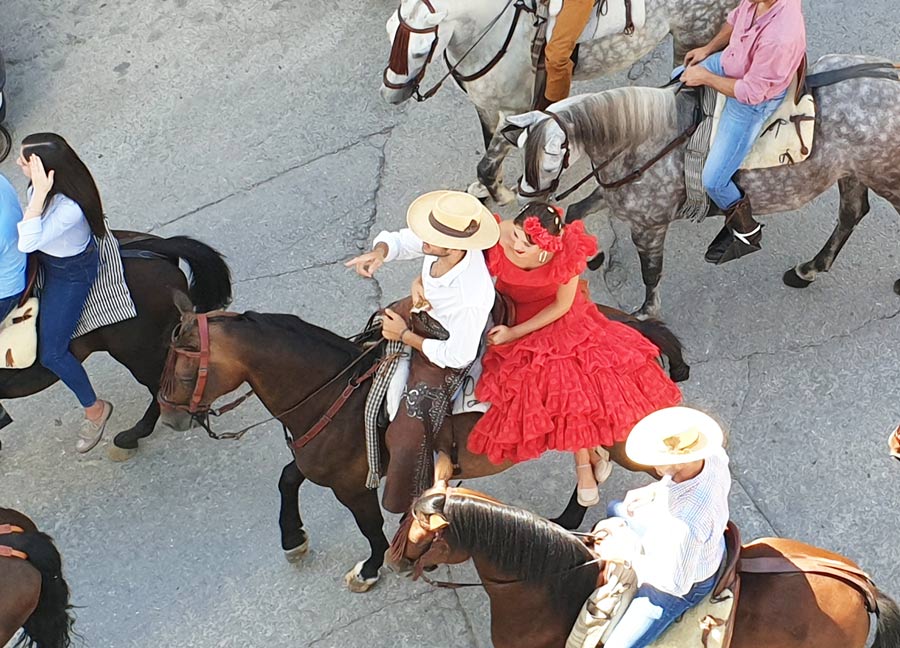