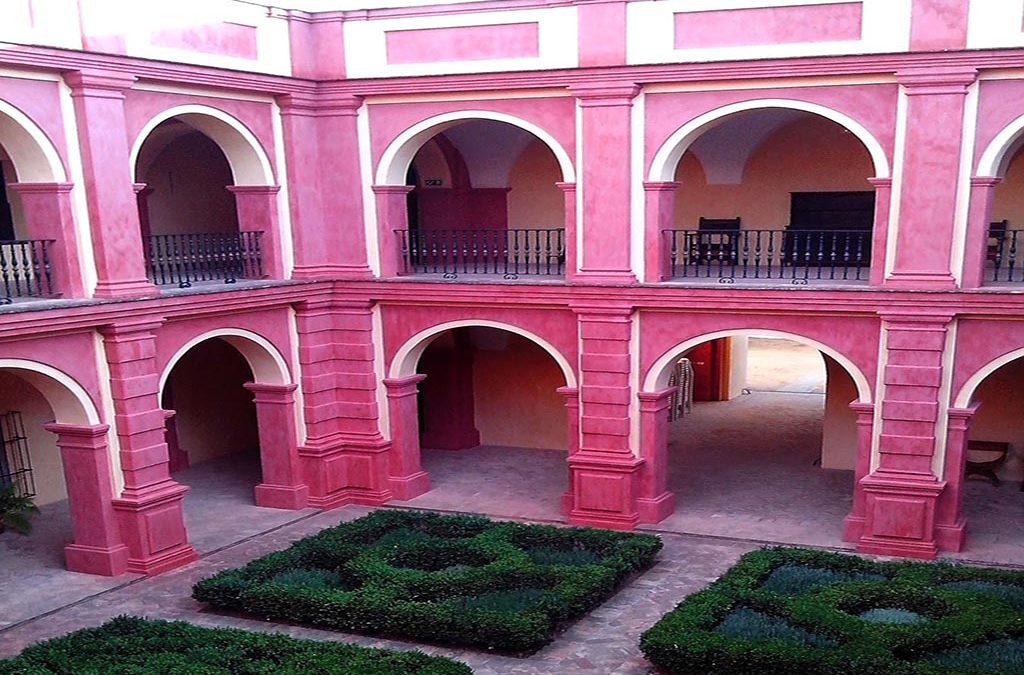 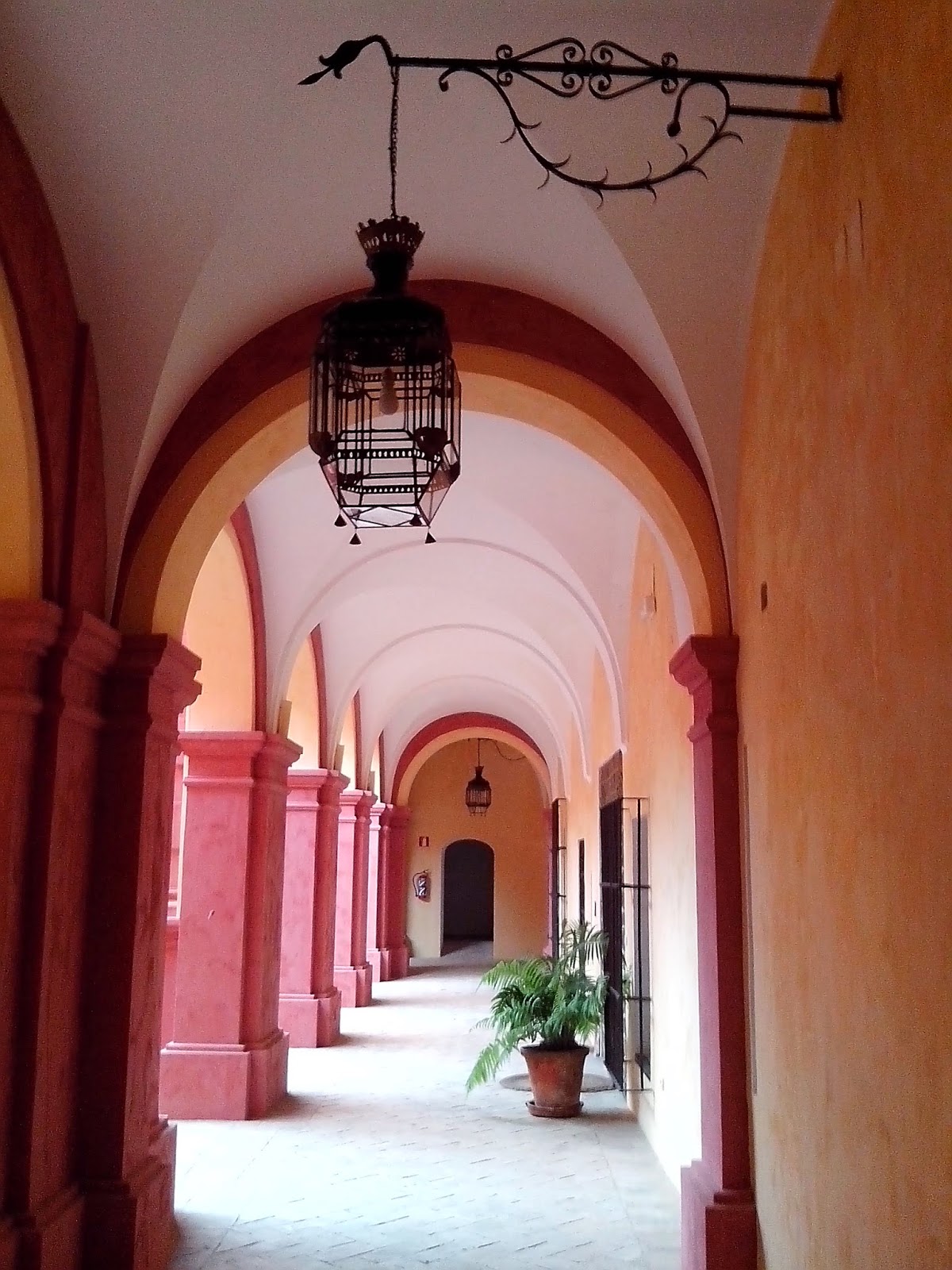 We are always asked, what are your favourite places along the many bike routes you have? One of our firm favourites is featured on the Enchanted Andalucia guided route and is a place that legends say, even the great explorer laid his weary bones down for a rest.  If you want to get a feel of this famous historical person, then we recommend cycling Andalucia Spain in Columbus’ footsteps.  Easy to do, as some places have remained the same for centuries!

The joy of cycling Andalucia, Southern Spain in Columbus’ Footsteps!

For a mid-sized Andalucian town, set almost midway between Seville and Cordoba, Palma del Rio packs a lot into a small amount of space. From crumbling Arabic walls, baroque churches, an iron bridge by the Eiffel school, a monastery where Columbus slept, a palace movie set for a Hollywood film, a famous bullfighter and a great modern day children’s playground!  And did I mention the oranges? Succulent orange groves surround the place, infusing the air with perfume, being fed by two important rivers of Andalucia.

Here in the heart of this town set upon the Guadalquivir River (its name belaying its Arabic heritage and meaning the Great River) and the Genil River (from the heights of the Sierra Nevada) is the enchanting San Francisco Monastery Hotel.  You can’t help be lulled into imagining its fascinating history from monastery to hotel sitting in its vegetable gardens absorbing the faint chatter of sparrow, the cool tile work and the hum of bees on the jasmine.

The hotel has a bouquet of little nooks, quiet courtyards and rooms each distinct as its former residents.  One room is filled with olive oil amforas, in another a lion’s head guards a deep tiled bath with high frescos.

Unlock the room of your neighbour, and find they can sleep with the windows open looking to the herb garden that the hotel tends and adds to dishes.

During spring months, storks love to build their nest atop the bell tower

They arrange their sticks for nesting in a precarious manner. During the hotter months, the long thin pool makes for tranquil lengths for keen swimmers. Have your breakfast in the long timbered dining room and take dinner of delicious local dishes outside in a courtyard patio. 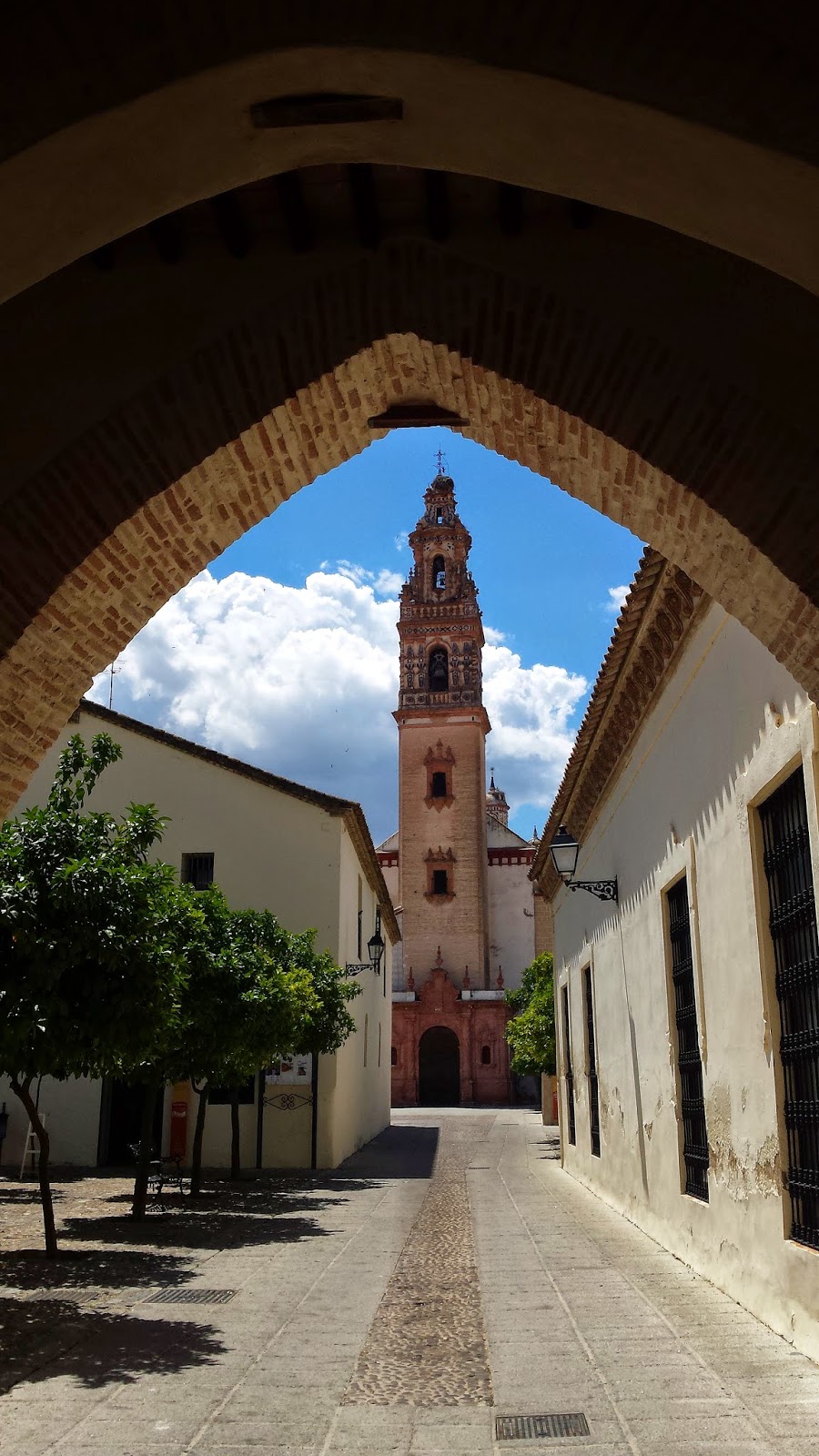 The monks of this Monastery (founded in 1492) went to California with the expedition of Fray Junípero Serra (1713-1784) and founded many of America’s well known cities including San Francisco and Los Angeles and the various missions, Santa Barbara, San Juan Capistrano and San Jose.

The delicate 18th century fresco in the entrance of the hotel shows what fruits and vegetables made it back to the dinner tables of Palma from these new lands. It was turned over to the Moreno de la Cova family in the 19th century and became a hotel in the mid 20th century. 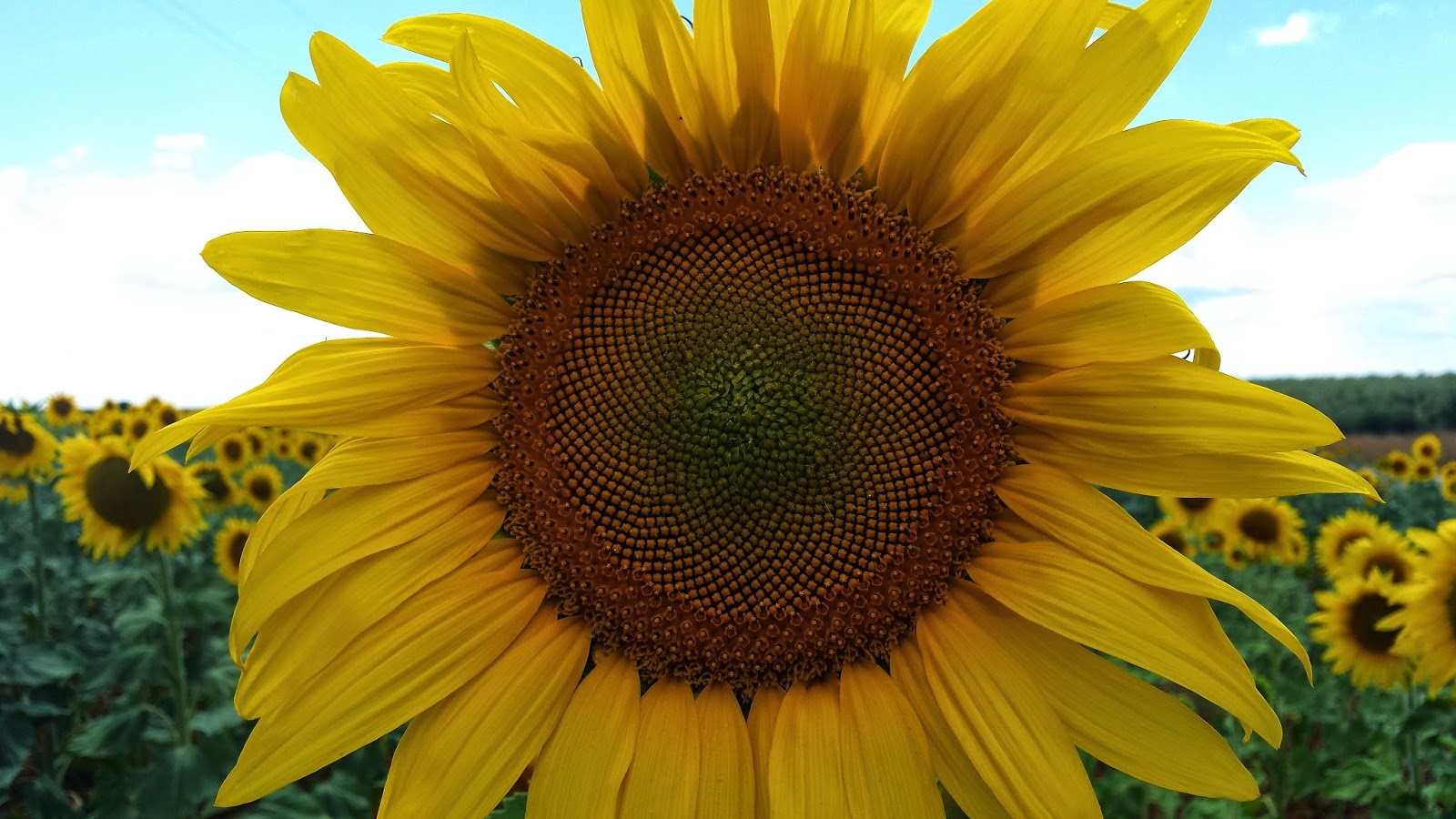 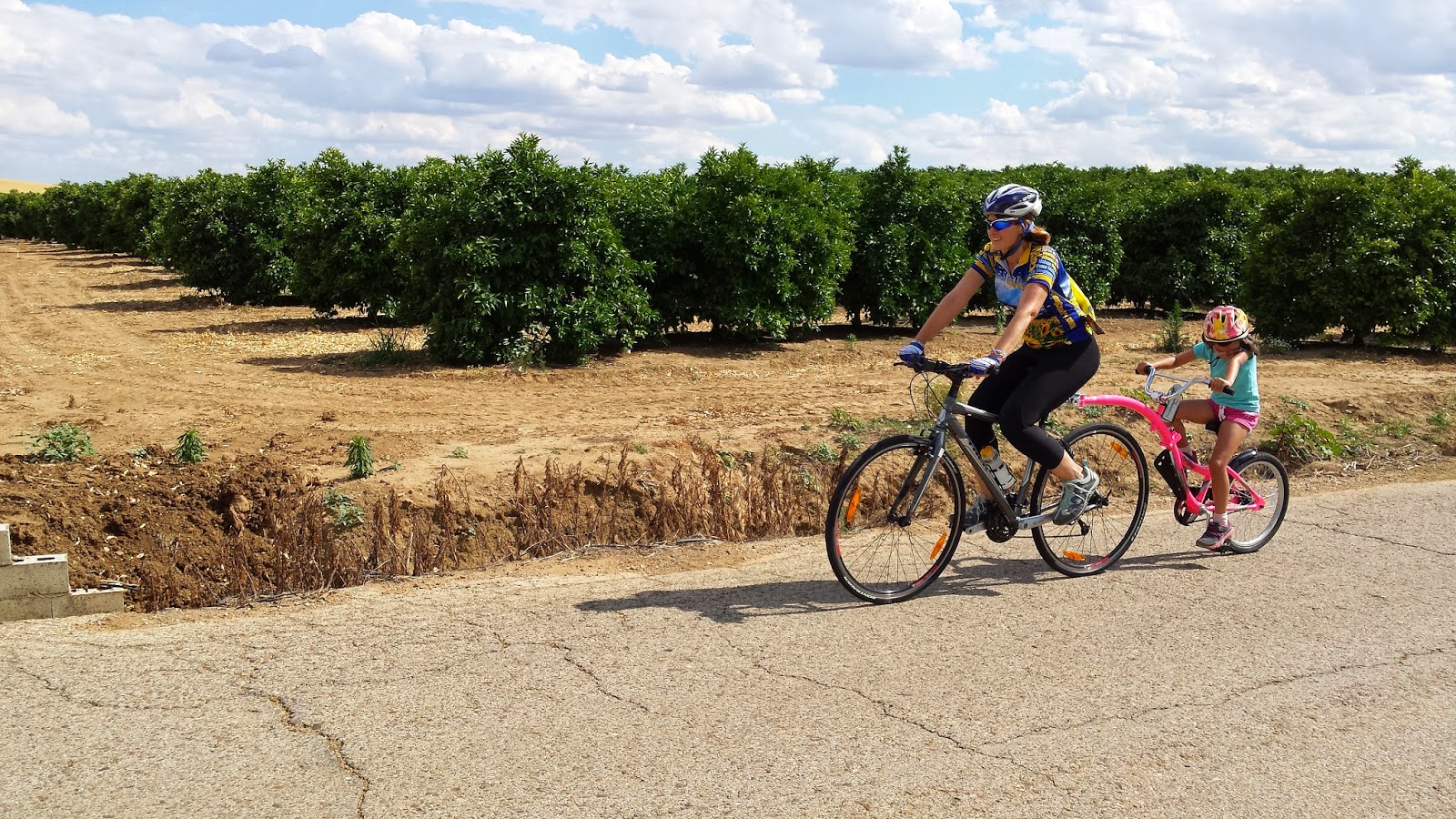 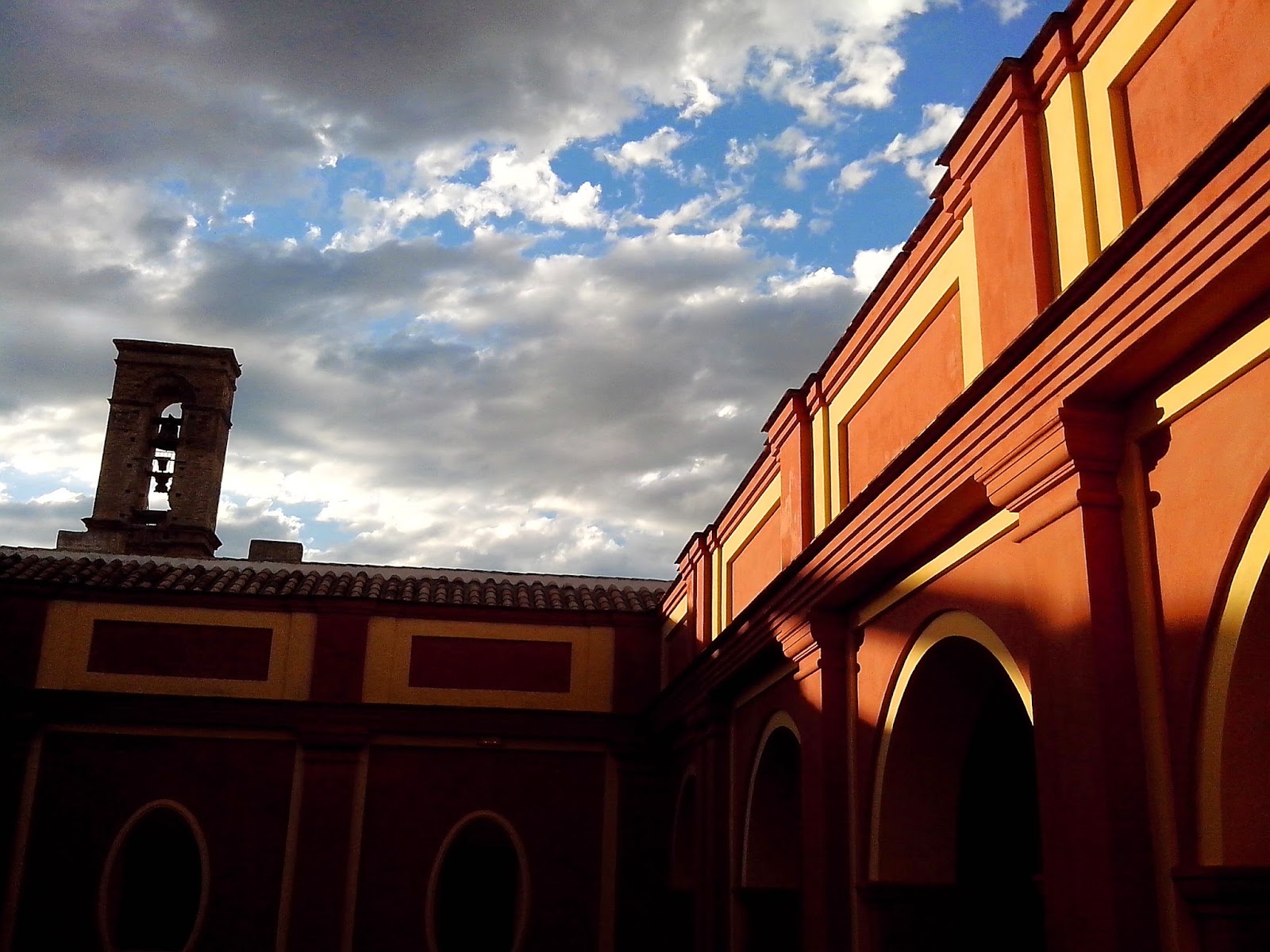 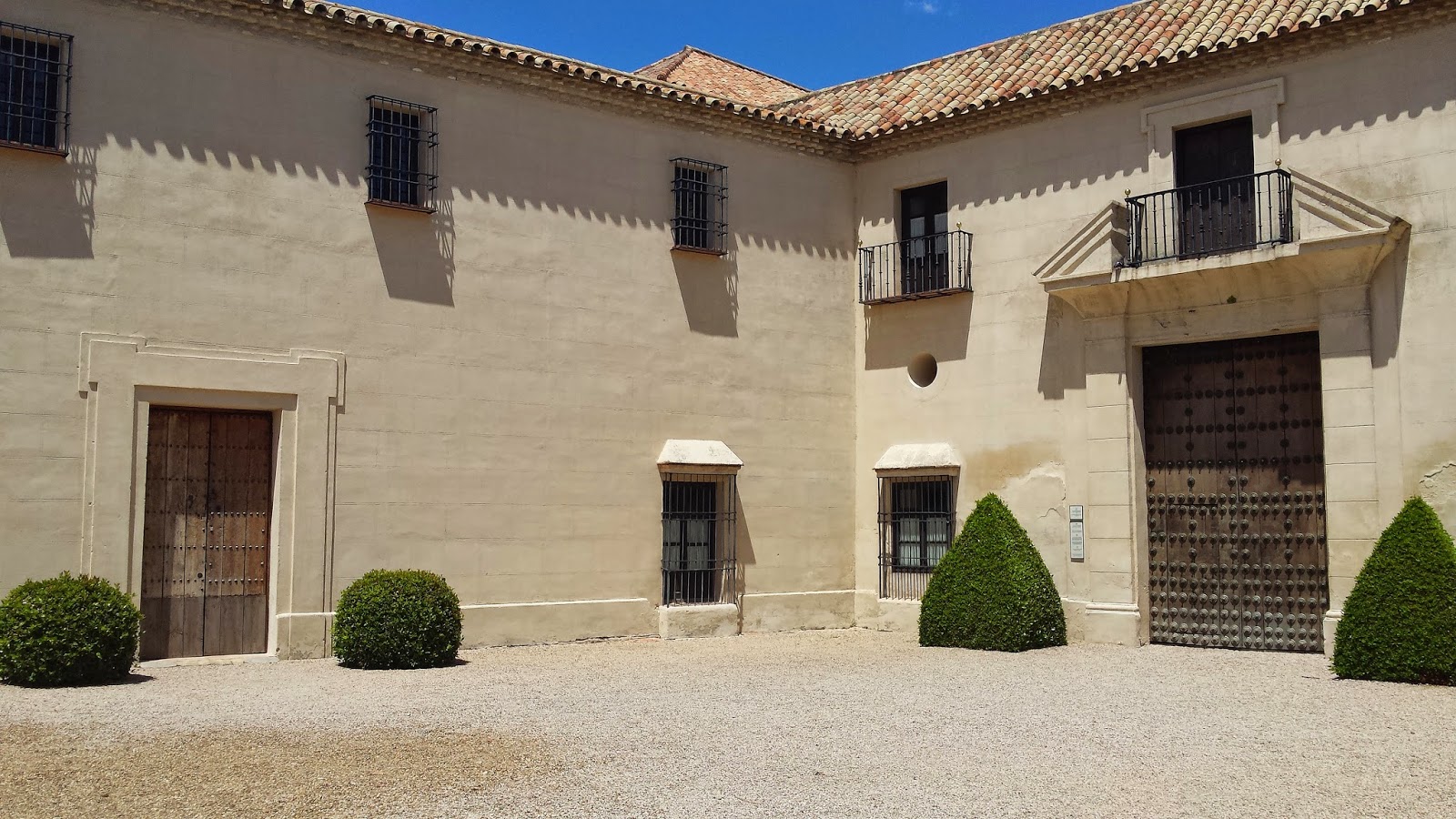 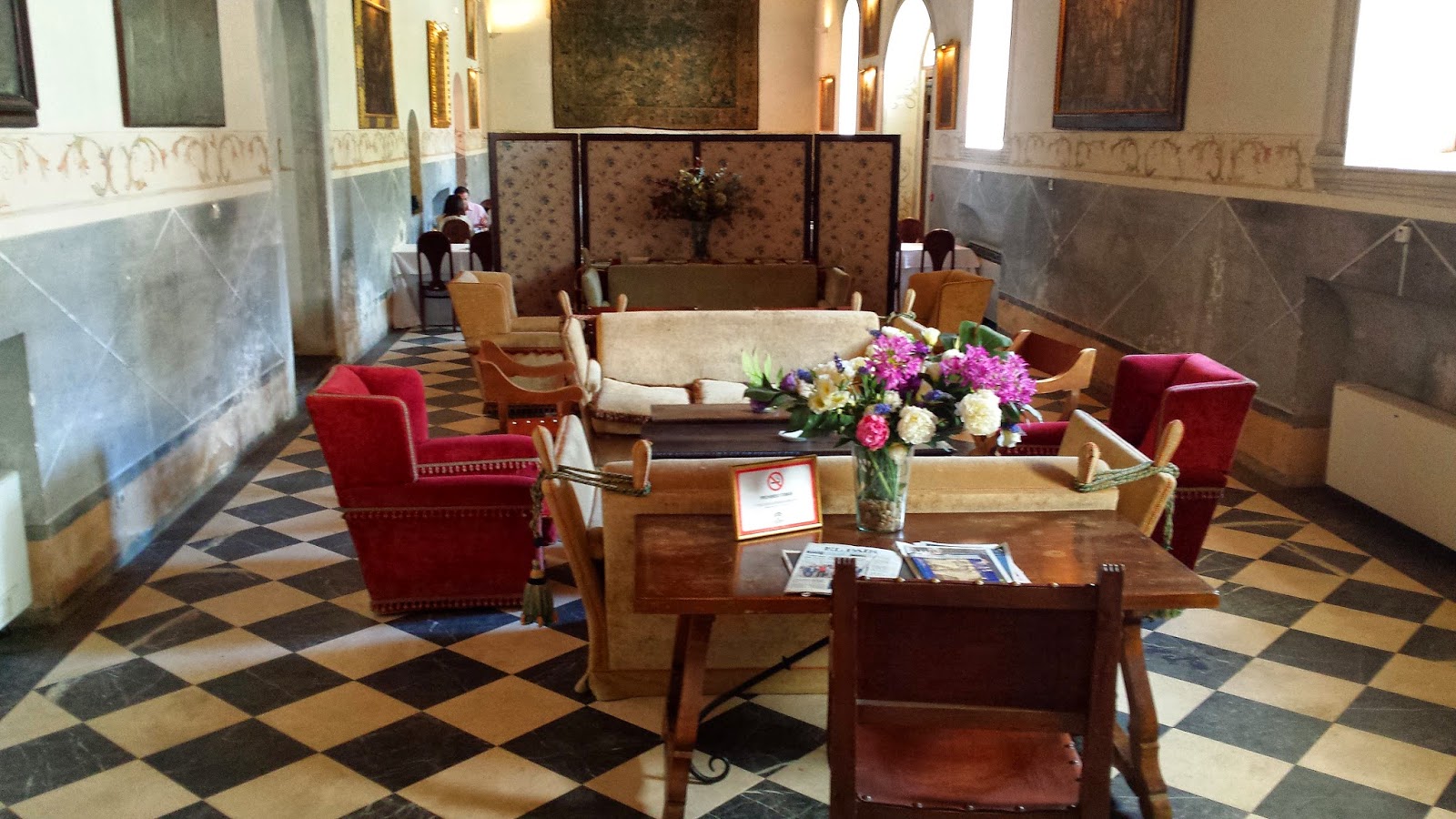 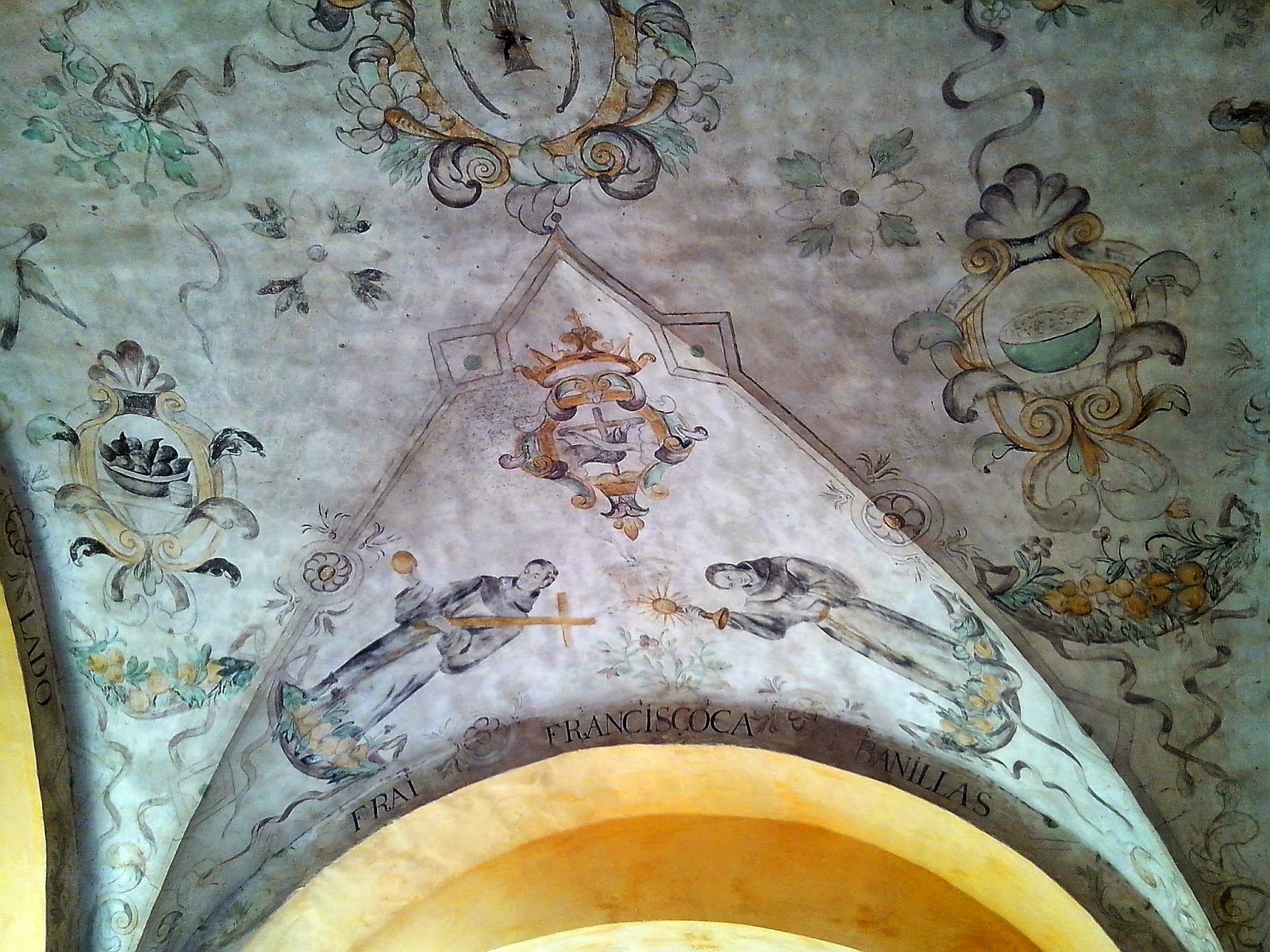 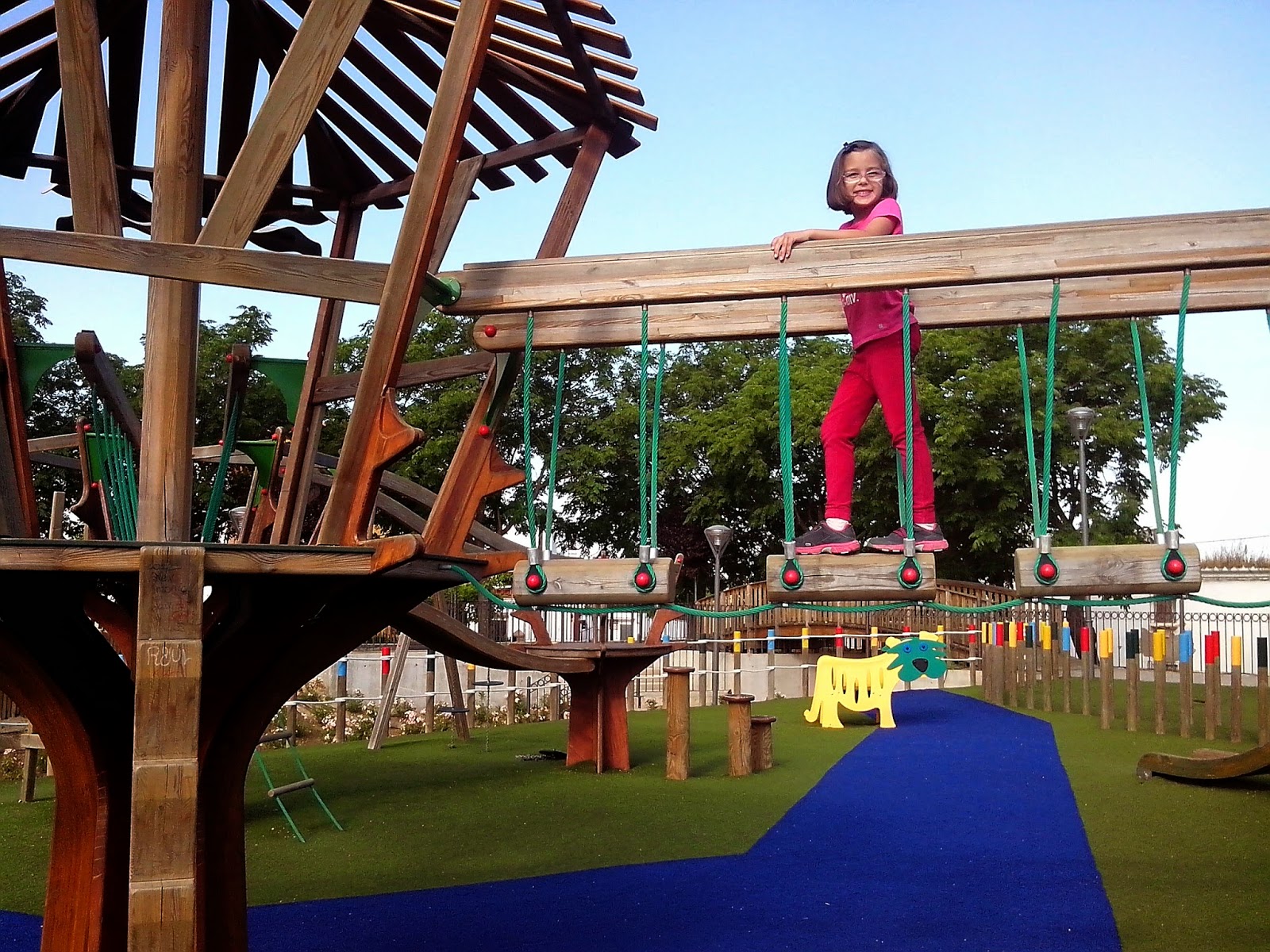 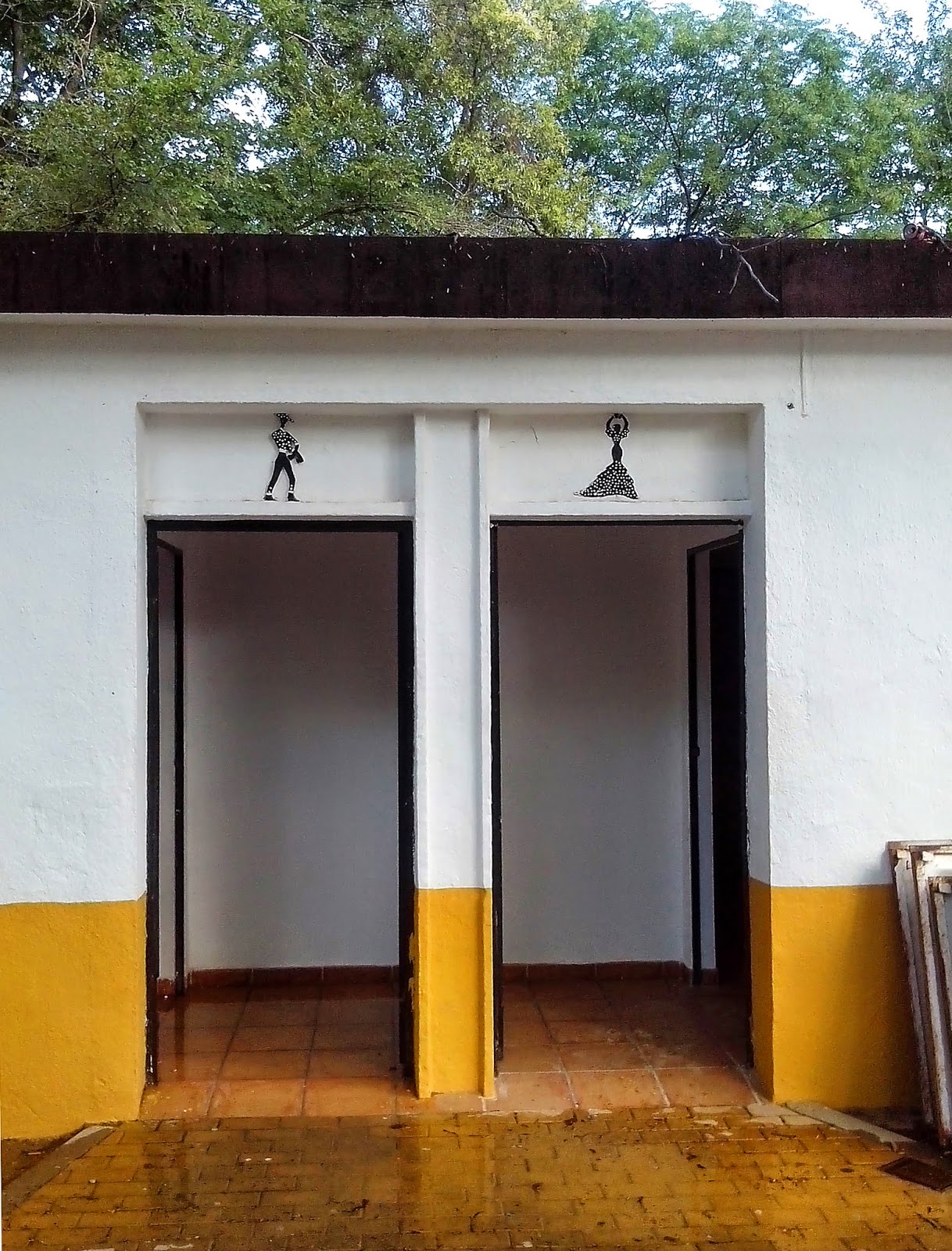 Is it haunted? With so many people over the centuries of human passage through Spain’s turbulent history, could it be a possibility?

You might entertain the thought and stand in one of the quiet doomed hallways with an afternoon thunderstorm threatening, swearing you saw a flickering of apparition. However Ana at reception dispelled that with a, “Ghosts? If they were here, I wouldn’t be!”.

The pretty town of Palma del Rio boasts not just of this pretty 15th century monastery but has remnants of past illustrious civilizations just down the narrow twisting whitewashed Arabic derived barrios (neighbourhoods) which serve to protect residents from the scorching sun and also possible invaders. The thick defensive walls lead to a palace that was featured in Ripley Scott’s film “Kingdom of Heaven” (think Liam Neeson and Orlando Bloom) and an elaborate tiled church with curving Baroque marble columns.

It is also the town of famous bullfighter El Cordobés, whose life story was told in the Larry Collins and Dominique Lapierre’s book, “Or I’ll dress you in Mourning” who came from poverty and became known by using a highly dangerous acrobatic style.  El Córdobes was once Spain’s highest paid torero (matador).

Getting to Palma during the later reaches of spring means a distinctly bright countryside filled with the cheery faces of sunflowers standing sentinel in the huge landscape. The word for sunflower is girasol in Spanish (the verb girar to turn, sol meaning sun).

The town is a good base for some day rides (especially towing children) and the younger ones will love the 2 excellent parks, one which features tree houses and cool slides and more importantly for mom and dad, a central café.  However, don’t kid yourself, this town gets scorching in the summer months and everyone will hide away inside in the dimness until twilight brings them out again into the cool of evening where Palma blooms back into life.

Palma del Rio in Andalucia, which like tapas, is a collection of varied yet remarkably rich and satisfying experiences.  See it for yourself on our Enchanted Andalucia guided tour or our self guided Moorish Andalucia route.

If keen to explore this area and discover by cycling Andalucia, Spain, in Columbus’ footsteps, then look at our 2 tours here: