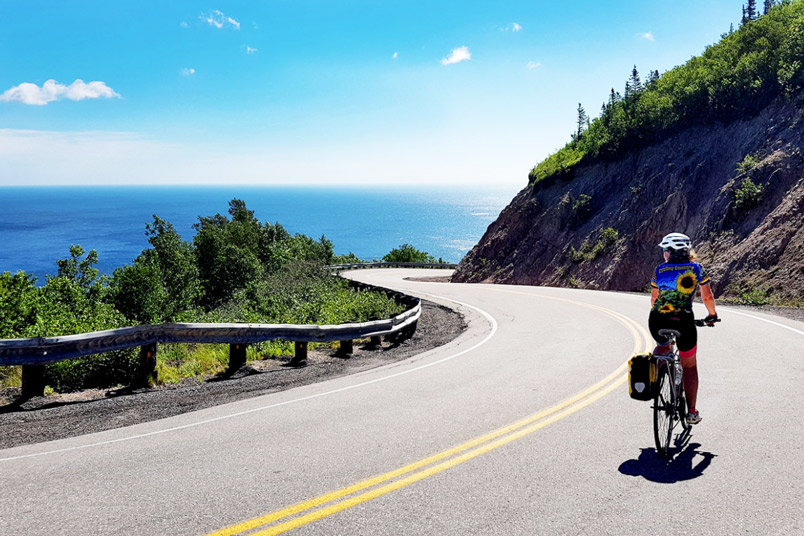 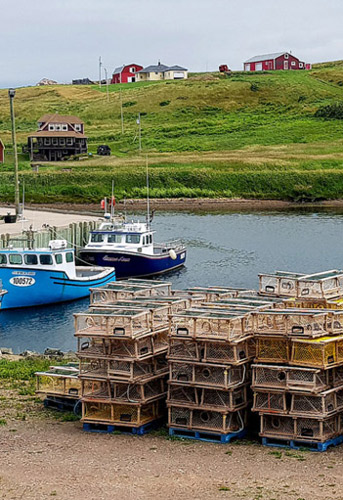 Bike Touring Canada’s Cabot Trail is a bucket list must for Cyclists.

Discover Canada’s Maritime theatrical landscape by cycling the famous Cabot Trail, a short but epic bucket list bike ride.  A true slice of Canadiana, this outstanding cycle route is a slice of wild and a bike trip that every road cyclist will want to accomplish.

Patting my belly after the full lobster plate, I mentally calculated how many miles I’d have to cycle in order to have more lobster meals before leaving the fine province of Nova Scotia. Could I also squeeze in a second piece of homemade pie, perhaps blueberry now?

Winters in Canada’s best loved province of Nova Scotia can be unpredictable with Atlantic storms.  However, the rest of the year abounds with music, culinary delights and outdoor living. The residents seemingly making up for those harder months in enthusiasm and joie de vivre.

No better place to discover this than cycling the Cabot Trail. The most scenic circular paved road cycle route in North America, it is akin to America’s Route 1 fame-wise. Each year about 250,000 people drive it, but cycling Canada’s famous Cabot Trail is the bucket ride destination for bikers. A fresh air fiend’s paradise, it is situated in Canada’s Eastern province, Nova Scotia and its Cape Breton Highlands National Park.  Reach it by travelling 470 Km (290 miles) north east from cosmopolitan Halifax. Then enjoy a good couple days road cycling around sea vistas, pretty coves and woodland.

This famous Canadian must do bike ride is one that all cyclists will love. 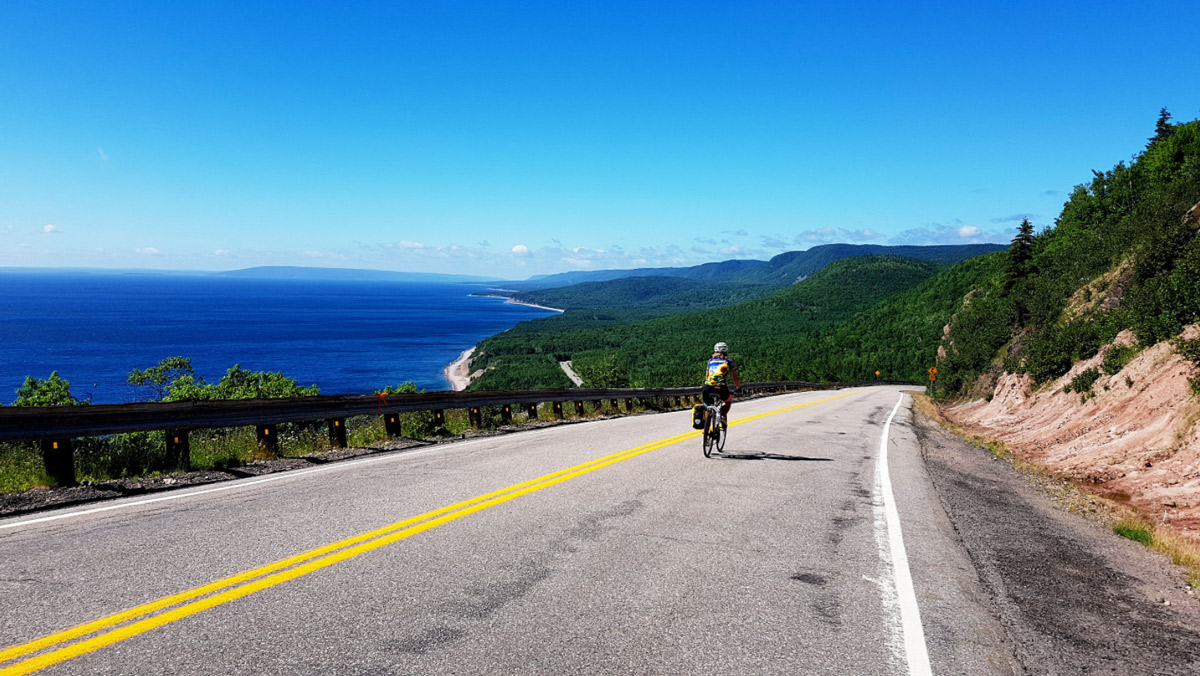 What do you see cycling the Cabot Trail?

Containing a huge system of hiking trails, from challenging to family amble and camping grounds throughout, it is a wonderful place to explore on 2 legs too. Walking, bird watching, diving, canoeing and kayaking are popular and for colder month athletes, skiers will find it is a winter wonderland with networks of cross-country and downhill runs. 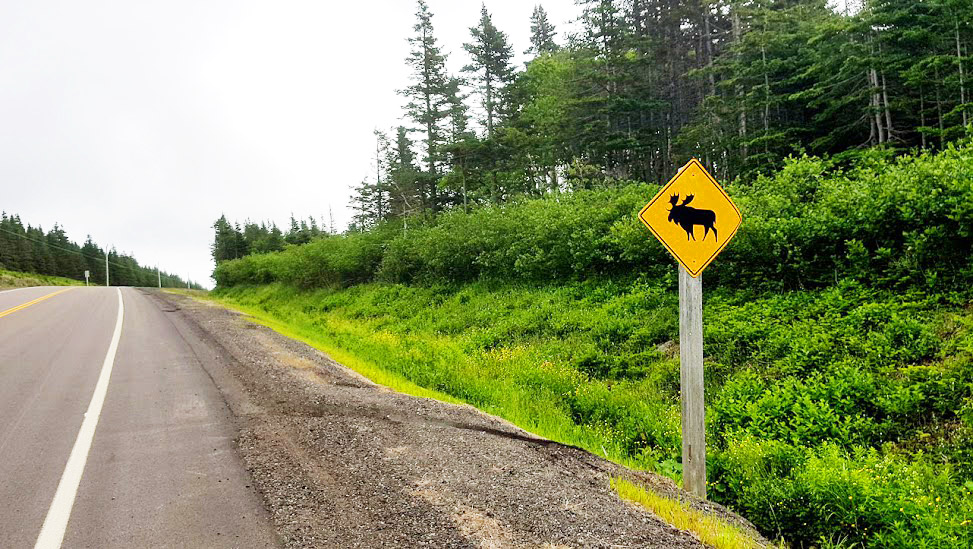 I’ve seen the Canadian and American Rockies,
the Andes, the Alps and the Highlands of Scotland, but for simple beauty,
Cape Breton outrivals them all!
Alexander Graham Bell 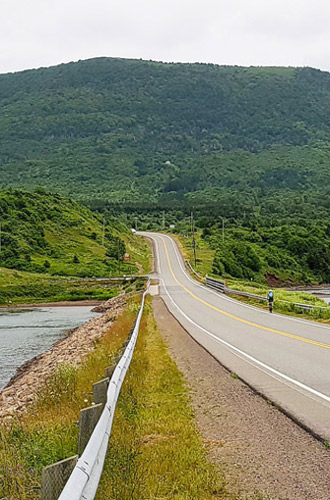 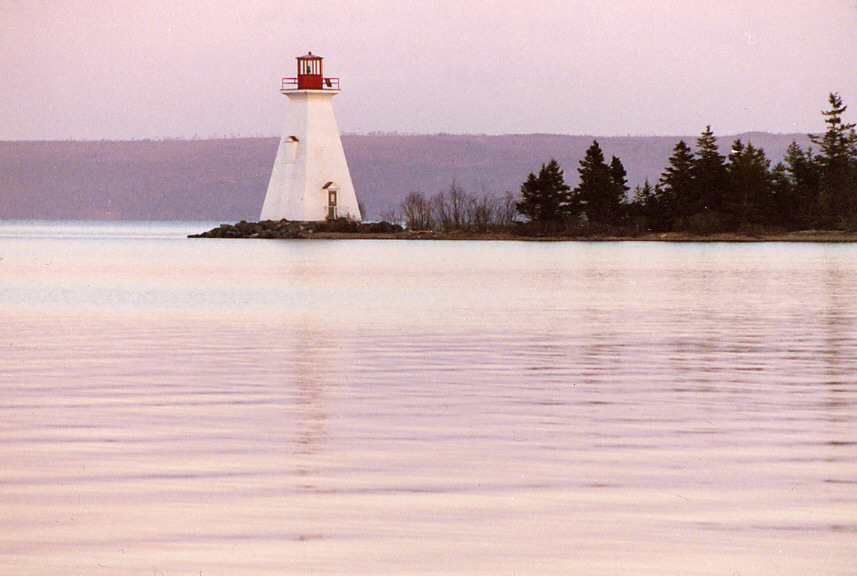 Which way to cycle the Cabot Trail?

Cycling Canada’s Cabot Trail? Should you bike the route clockwise (best scenery at the end, wind at back) or counter clockwise (cyclist gets a great view being next to the view) but..? Either way, you won’t be disappointed, even in atmospheric rain and fog where spruce trees have stark ghostly silhouettes. Vistas from the road are breath taking both ways, with magnificent forests (saturated in colour in autumn), stunning ocean panoramas and wild inlets. Be brave, just go! 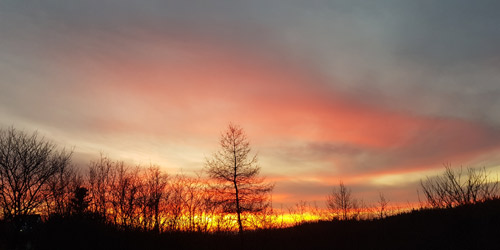 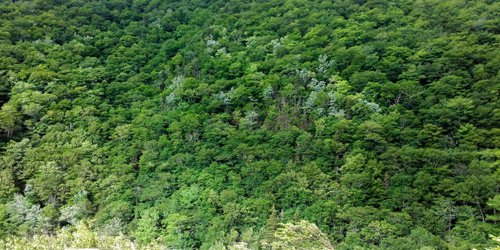 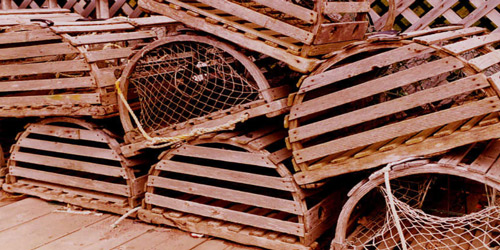 Cycling the Cabot Trail in Canada – The Stats

Cycling 5 to 7 days will take you around the Cabot Trail’s entirety. This bike ride is filled with a couple awe inspiring (or hernia inducing) climbs of 10% plus for a couple kilometres through the Cape Breton Highlands National Park and some switchback riding. Your reward, carved into the coastal edge, impressive panoramas. This moderate 298km (185-mile) bike ride will put hair on your chest with some of those climbs but is definitely worth the feather in your cycle helmet.  The views, unforgettable. 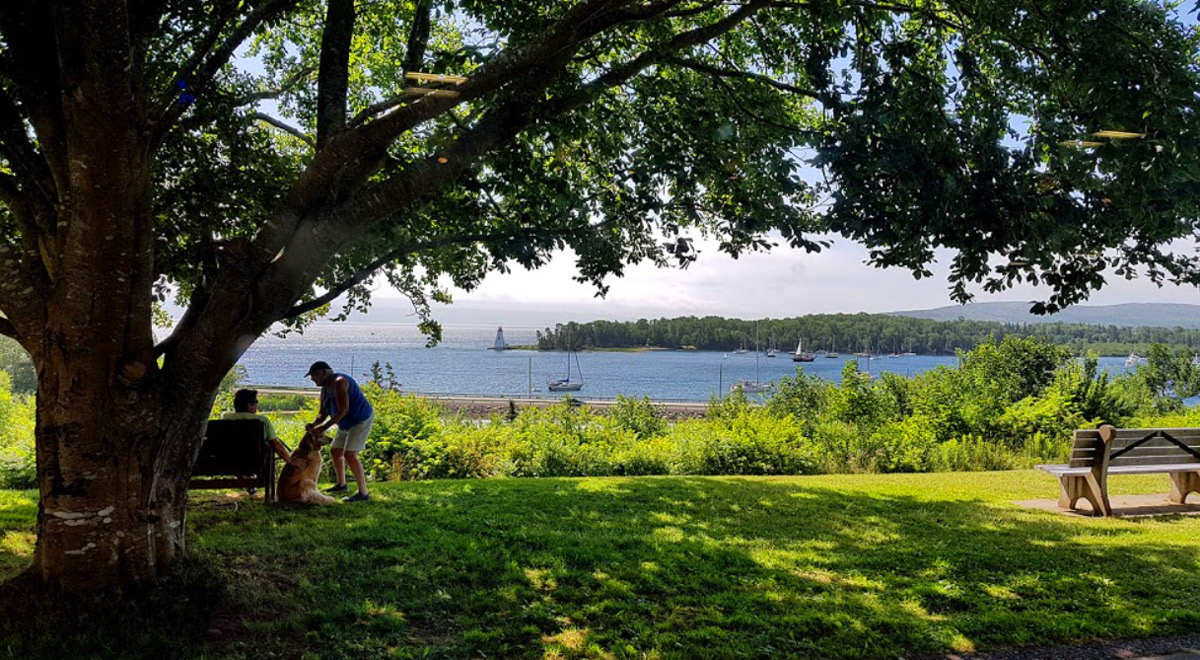 You will soon realize upon cycling Canada’s famous Cabot Trail, that not only do Nova Scotians have outdoor activities, but Cape Bretoners have perfected their talents for indoors crafts too. Due to an often rough winter, Rug hooking, folk woodcarving, baking and pottery are traditional and around the route there are piles of such art studios. Cheticamp supports the Dr. Elizabeth Lefort Gallery, showcasing her sumptuous woven tapestries, some owned by the Vatican, past U.S. President Bush and Queen Elizabeth. 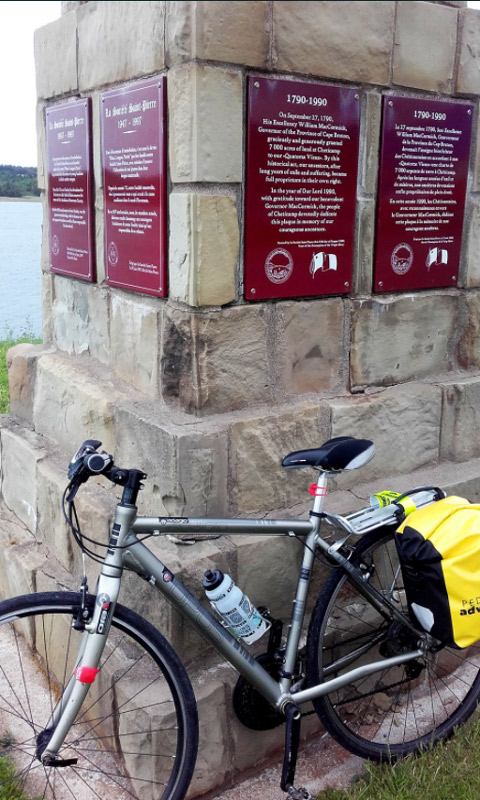 Places to visit while cycling the Cabot Trail

Alexander Graham Bell, creator of the telephone, spent much time here with his family at the Beinn Bhreagh estate (Gaelic for “beautiful mountain”). Today’s museum has an excellent collection of his inventions.  Enjoy its comprehensive view of Bell’s life and interests like hydroponic farming, air flight and working with the hearing impaired community. Bell and his wife loved Beinn Bhreagh so much that they elected to be buried here on the estate. Just outside the museum there is a pretty picnic spot with vistas of the Bras d’Or Lakes to enjoy before you cycle on. 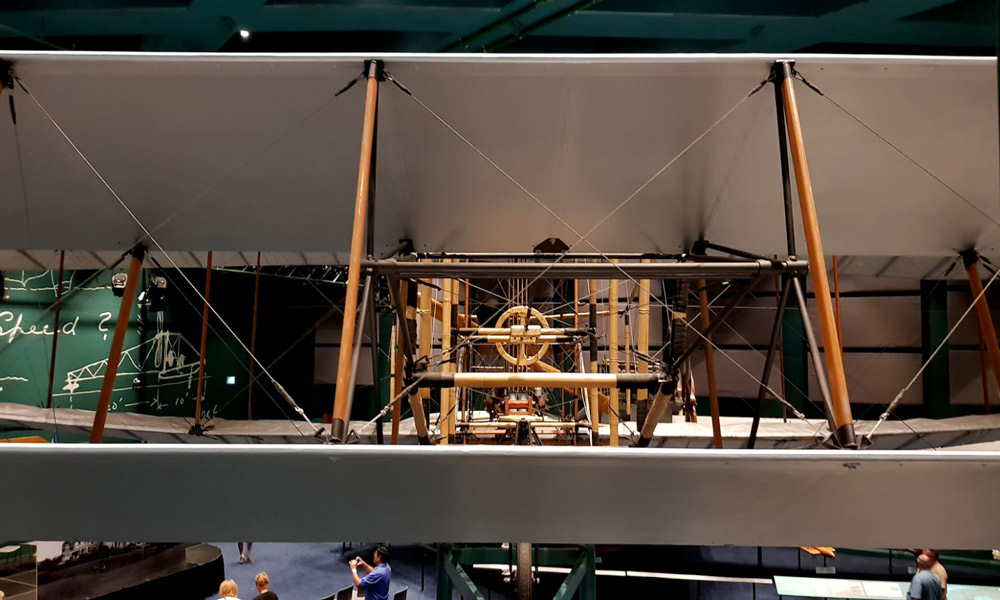 Know the History of Cape Breton before your Cycle Trip

In 1497, John Cabot turned up claiming the island and “hey why not all of North America while I’m at it” for the British. Not too big of a problem, except Portuguese and French fishers also had settle. During the 1700’s with English and French fighting to consolidate power in North America and a little thing called the 7 Years war (1756 to 1763), things grew very ugly for everyone.

French communities called Acadians (L’Acadia was today’s Maritimes and then part of “New France”) were destroyed,  families separated, deported to inhospitable areas across the Eastern Seaboard, subsequently dying by the hundreds.  Many fled to what is now Louisiana and are responsible for the Cajun communities there today. A sad period in Nova Scotian history immortalized with the famous tragic love story of the Acadian girl “Evangeline, A tale of Acadie” by William Longfellow. 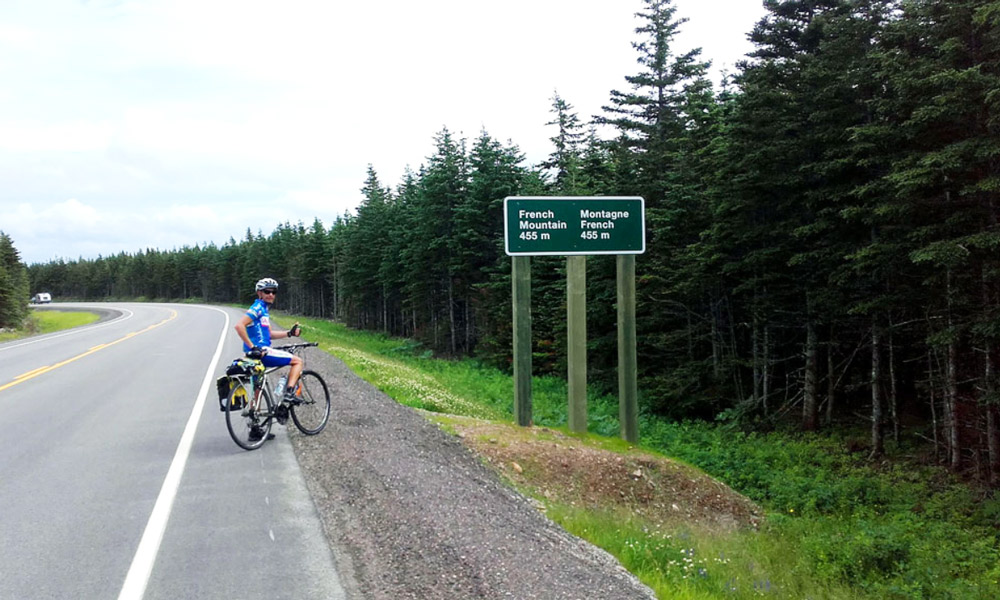 So, you can imagine with such cultural influences how the dialect sounds in this part of the island.

Cheticamp is where I had my mouth-watering meal, overlooked by the elderly ladies of the town. Being in a French enclave, I tried my best french, “C’est Merveilleux!”. This was returned with a torrent of Bonhomie, which sounded like, “ my pigs got stuck in the loo”. Let’s just say the French spoken here is a wee bit different. In fact, the English lingo in Cape Breton, is just as confusing, and I had to sometimes scrunch up my eyes in concentration to their singsong accent.

In one hotel, we were met with “Jeet?”, which translated as.. Have you eaten yet? Take your time, you’ll get the hang of it.

Luckily one can rely on the international language of music to bond with Cape Bretoners. Acadian gigs with accordions and guitars are prevalent in towns and villages. Alternatively perhaps try Celtic music with a “fiddling ceilidh”, often heard around Margaree (south of the park) and the coast quite regularly. 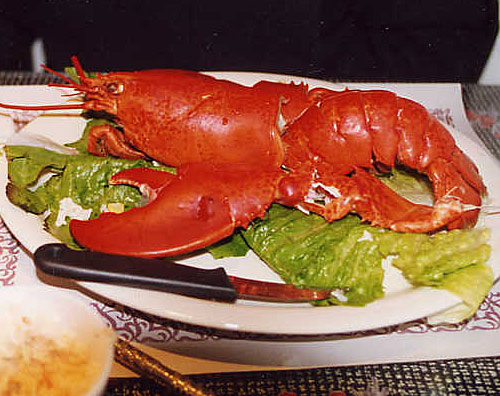 What food is the Cabot Trail famous for?

Experience fresh harvest from the sea, gardens, forests and fields from June to October.  A custom in the Cape is that community clubs, churches, fire departments, etc. host Lobster, Blueberry, Strawberry and Maple Suppers as fund raisers. It is a real Nova Scotian dining tradition to take advantage on your bike ride.

Delicious large home cooked meals for bargain prices and good causes. The real bonus is that if you do indulge, the lobster is one of the least calorific seafood meals there are, low in fat and high in amino acids, iron and zinc. Ironically, it wasn’t long ago that children bringing lobster to school for lunch were teased mercilessly for being too poor to eat normal food. Although the times of lobsters being so plentiful that just throwing a net overboard would capture many, are over, there are many endeavours for controlled stewardship of this important “cultural” aspect. 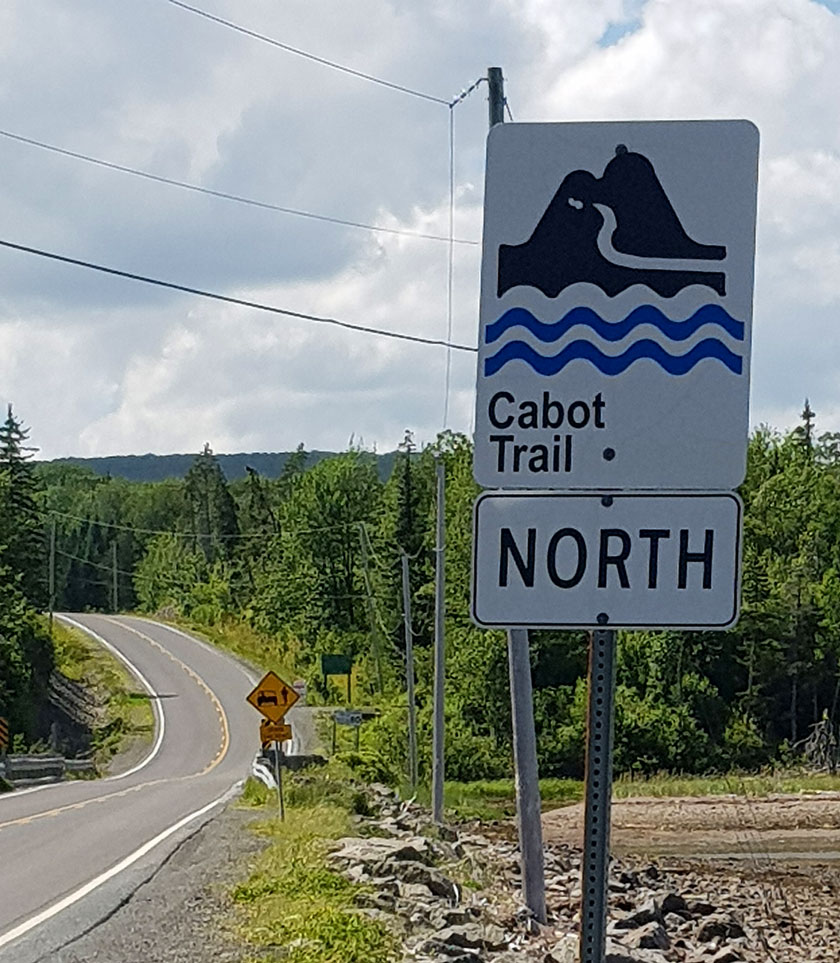 You will not be surprised to learn that Cape Breton Maritimers are a close-knit bunch. Due to their harsh Atlantic sea faring life, they feel strongly about community ties and take hospitality very seriously.

This attitude extends to their overseas visitors and people I met were obliging and friendly. Being a cyclist on the Cabot Trail, even more so.

It is not remarkable that the British put up a good fight to secure this area of the world. With its beautiful scenery, tasty food and good ole Maritime friendliness, it is a place that is hard to want to leave. 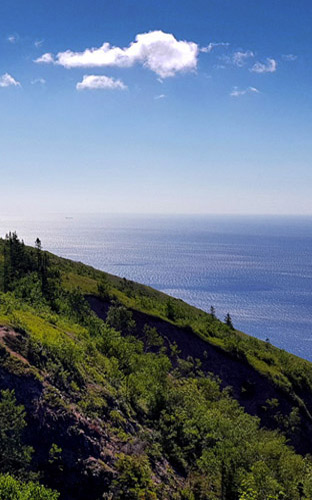 Trip Tips for Cycling in Canada

How to get to Halifax to start cycling the Cabot Trail 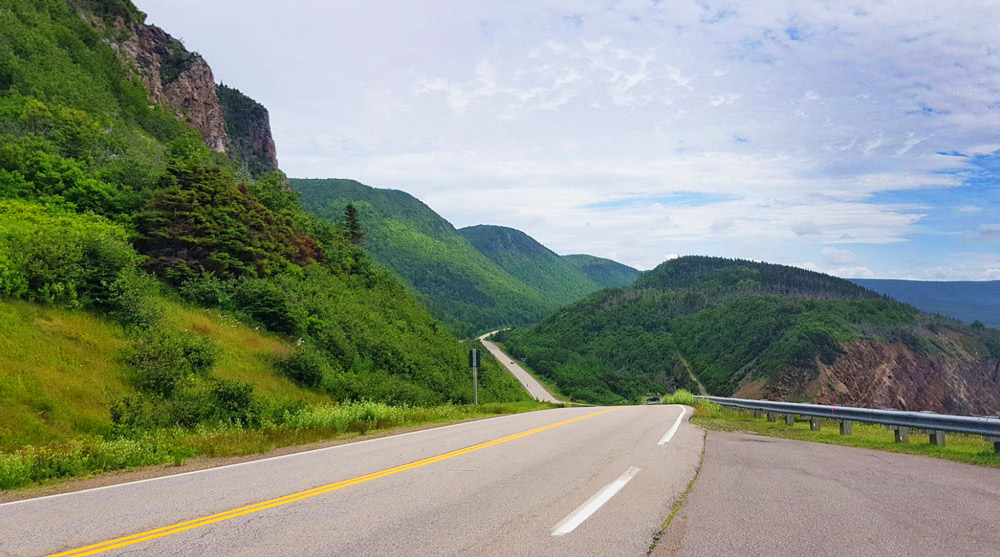