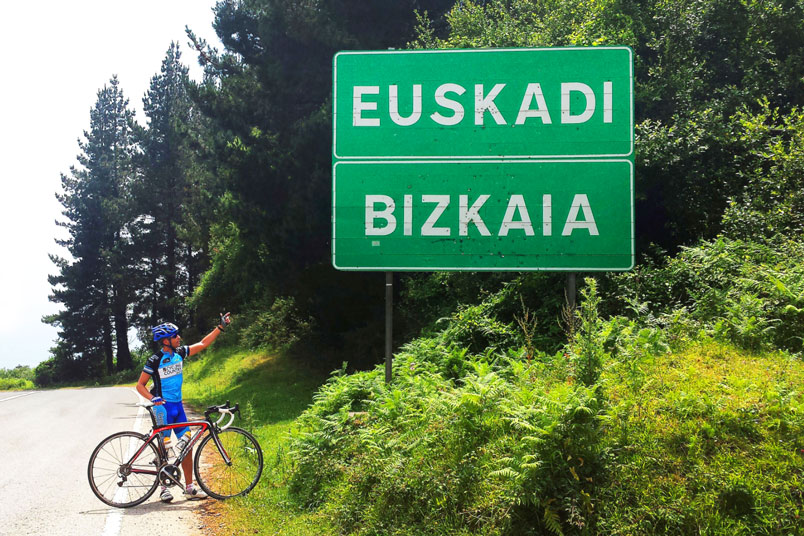 If you love road cycling, do not pass up the opportunity to cycle the mythical Basque roads. Basque Country cycling includes challenging La Vuelta climbs, and with its many famous pro cyclists of outstanding climbing ability, a solid pedigree of road biking achievement. In short, a bucket list destination for all cyclists. Check off these famous Basque Country cycling climbs!

Why cycle the Basque Country?

Cycling in the Basque Country (Northern Spain) is an awesome bike destination due to excellent road surfaces, route diversity and the feel of being in a cycle friendly and legendary region. Road cyclists will love cycling this mythical area. The climbs can be anything from short and impossibly steep to milder inclines, but always with some staggering scenery and dramatic landscape. Cyclists will always feel fulfilled after a bike ride up any of these northern peaks in Pais Vasco.

What is the most famous bike route in the Basque Country?

Without doubt, the Alto Arrate (Alto Ixua) is the most recognizable climb in the Basque Country. Although not high (556m) it is often ridden in La Vuelta and Tour of the Basque Country making it iconic. Stars such as Indurain, Contador, Quintana and Basso have won there, with Primoz Roglic winning stage 1 of La Vuelta 2020 atop the summit on the way to defending his title. It can be climbed from both sides but the southern side starting in Eibar is brutal – at only 3.7km long the average gradient is a leg burning 10%!

With the popular UCI Clásica San Sebastián one day race showcased annually in professional cycling’s calendar, the Jaizkibel climb is close second in terms of fame. Sitting near the French border, this famed summit overlooks the sea, is not too hard to climb, and makes a good loop ride from San Sebastian.

The Urkiola is another beautiful and classic climb from Durango. If you want to test your mettle, Monte Oiz is THE challenge you won’t forget. With incredibly steep ramps, the views from the top make it all worthwhile! Read more about it below. Check out our table for the stats on the top famous Basque Country cycling climbs to ride on your next bike trip to Spain. Earth belongs to the brave but heaven to those who deserve it. Start off cycling in hilly Bilbao, the main hub city to northern Spain’s Euskadi (in Basque), País Vasco (in Spanish) or in English, the Basque Country and you will get a great taste of what is to come.  Bilbao has certainly improved its reputation in the last few years.  It has gone from a fairly grimy port on the temperamental Bay of Biscay, (it is Spain’s 4th largest city) to a centre of arts and culture with its Guggenheim museum and International Airport to fly into.

It is a superb place to arrive as an intro to the Northern Spain’s amazing food, culture and to start cycling their awesome mountains from. Alejandro Valverde (twice winner of the Clasica San Sebastian) – “I know the parcours perfectly. For me the key is the Jaizkibel, no doubt about it.”

Cycling with La Vuelta in the Basque Country & Bilbao

Today Bilbao has become a hot spot for Europe with artists or sports people once again. It was showcased in La Vuelta in the 2018 race program with great success and featured again in La Vuelta 2020.

However, this inclusion into the Grand Tour Pro Cycling calendar hasn’t always been guaranteed.

For the local cycling fanatics, La Vuelta a España arriving in the Basque country was, and is, always a very, very big deal. Preserve of the pro cyclist and some of Spain’s greatest including Abraham Olano and Jesús Loroño, the Basque Country hadn’t since 2011, been featured in a Vuelta for 33 years (1978!).

In that year, the stage was called off after the streets were strewn with nails, logs and barricades. Notably avoided since then (and politically motivated due to ETA threats), the “Orange Tide” made itself known since its welcome back into the grand tour cycling calendar. The 2001 arrival of the Tour de France saw immense crowds of Euskaltel supporters, cheering and waving their bright orange flags alongside the road. In the 2011 revisiting of Pais Vasco by La Vuelta a España, Samuel Sanchez, Olympic gold medallist in the 2008 Beijing Olympics and former member of the Basque Euskaltel-Euskadi team commented, “These are two decisive stages, with very difficult climbs and descents and people are going to suffer a lot. It is going to be very exciting, and I think for a few days, people are going to set aside the politics and come out for the race.” Fortunately, he was right. It was a great few stages and set the stage for La Vuelta to return many times since then.

In Cycling, what is the “Orange Tide”?

You cannot be cycling in the Basque Country without knowing the history of The Orange Tide – The Basques. Such illustrious cyclists, such great bike makers (think ORBEA & BH), and such a potent group to have in the Vuelta. That flash of brilliant orange near the head of the peloton has existed for almost 2 decades. Sadly 2013 was thought to be their last year as economic crisis took its toll on accruing sponsorship fees. However, just in the midst of La Vuelta 2014 the news broke that the Formula 1 driver, and cycling enthusiast, Fernando Alonso had bought the team and 30 riders to keep it going! Unfortunately, once in talks over the 6 million price tag, the negotiations stalled and it looked like the Orange tide had been consigned to the history books.

Fortunately, the Basque Country loves cycling too much and Euskadi–Murias, the Spanish UCI Professional Continental cycling team did eventually form in 2015 (2015 – 2019) and had some success with a stage win in La Vuelta 2019 by cyclist Mikel Iturria.

Euskaltel–Euskadi was once again re-formed for the 2020 season as a UCI Pro team, but due to Covid-19 and cancellation of the Tour of the Basque Country, they had a very limited season. Basque Country cyclists overcome challenges. In an area of folklore and tradition very much unique to Spain, the Basque Country holds sport and its adversarial nature to its heart.

In an interview with Euskaltel rider David Etxebarria, he compared the sport to the life the Basques knew under Franco. “Sport is a part of Basque culture, and because of the suffering and sacrifice it has more influence and is more deeply rooted than in other cultures. It is because of the repression through which we have lived.”

The tough reputation for cycling and life in general was forged by its landscape and also due to its oppression. During the Franco years and the civil war, the Basques were particularly picked out for persecution which included everything from physical violence to a complete ban of the Basque language.

However, it was perhaps the most infamous aerial bombing civilian massacre in the Spanish Civil War occurring in the Pais Vasco which really caught the world’s attention at Guernica.

There are too many to mention all, but here are some:

“Those who don’t Look Forward, Stay Behind.”
Basque Quote The 2018 Vuelta stage (Stage 17) passed through Guernica itself, on from Getxo to the famed and ultra tough Monte Oiz (via the Balcón de Bizkaia which was the name of the finish). Climbing it from the harder north side, the cyclists started out with 7km of pretty forest roads followed with a 5km cruel and steep incline up to an exposed summit (the weather was cloudy and cold – we were there!). Michael Woods (Canada) of EF Pro Cycling gritted his teeth, suffered it out and won the tough stage. The Basques love cyclists and the sport so you will be generously supplied with encouragement on every hill and of course there is always that delicious Basque cooking to keep you fortified to climb those uphills around here!

And of course, to say you survived Basque Country cycling is a real credit to every cyclist. Check those climbs off!